Blogging A to Z: I is for Igloos, Ignorance and Iguanas

Now, first of all, I must own up to the fact that I'm completely ignorant (with the exception of a few TV programmes) about the way eskimos live. I generally enjoy documentaries but, to my irritation, I've noticed that a lot of them don't tell you what you want to know or, just as they are about to tell you, they cut to some other subject or the adverts.

Blimey, isn't that habit is annoying? Documentary makers seem to think everyone has the attention span of a gnat. How come I can watch the entire Lord of the Rings trilogy in one sitting (bar loo breaks) but a documentary maker thinks I can't manage more than five minutes on the feeding habits of an otter? I hate that constant jumping back and forth  - by the time the narrator finally gets back to telling me the baby otter has learnt to swim or the owl has ate its sibling I'm so fed up with the episodic interruptions I've cracked open a bottle of red and I'm painting my toenails.

So anyway - back to igloos. I reckon they're pretty cold places (for obvious reasons) and what I've always been curious to know is - do Eskimos drop their trousers for the necessaries or do they have a "hatch"?

You see, I'm curious because recently I've been having a recurring nightmare that I'm trapped in an Eskimo-like onesie and I desperately need the loo. In my dream I'm repeatedly trying to undo the onesie with frozen fingers and failing. It's awful. It's like the worst nightmare you could ever have - and I've had some pretty gruesome ones. There was the dream where I parachuted into France with a horse, another where I was in an a prop shop where they were selling fake corpses and another time where I auditioned for a role as Santa Claus in a Ricky Gervais movie.

But none of my previous dreams compare in awfulness to being stuck in a onesie and needing the loo. The only saving grace is just as I'm about to pee myself the scene abruptly switches to a nightmare about a lost and hungry iguana. Well, for about five minutes. Until the iguana needs the toilet and discovers he's wearing a onesie....

That's when I wake up, dash to the loo and realise I've still got my tights on.

It happens. Believe me. The menopause can do very strange things to you. 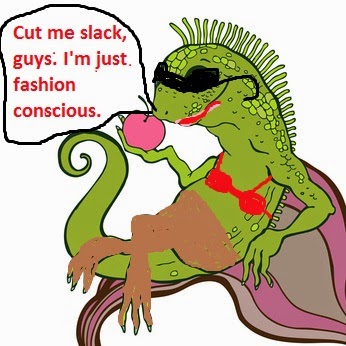