In reference to your recent email stating, "We believe we have resolved this matter for you", my response is "No, you have not." In fact, I have resolved this matter by a) cancelling my insurance policy with you and b) informing your staff that I will never be using the services of the AA again.
In addition, I will also be writing to my MP to advise him of the deeply prejudicial policies victimising those who work in the arts that the AA and its underwriter's support. As an author with an alternative full-time occupation who would have been charged an extra £500 on my policy for having a part-time "risky" profession, I will delight in putting my writing skills to good use whilst I compose my epistle. I will also take pleasure in penning it as I luxuriously sip a glass of champagne and nibble chocolates whilst sitting comfortably at my desk and not, as you seem to think, whilst drunk and careering dangerously around the M25 citing Shakespeare, phoning other impetuous authors to discuss rhyming haikus and intermittently drooling over nude photographs of Dan Brown.
Assuring you of my best attention at all times, 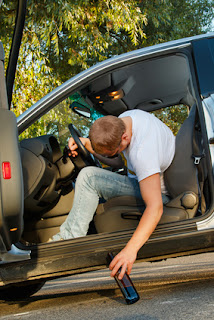 This children's author has just turned up at the local primary school to give his (unpaid) talk on his latest book "Around the M25 in Eighty Days, Fuelled by Coke, Booze and Fags." 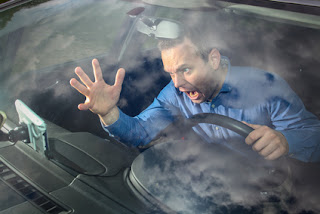 This author is upset that after returning from a trip to his local library where he has given an (unpaid) talk on publishing and found that his insurance company have increased his car insurance premium by five hundred pounds. The despair on his face is due to the fact that he planned to gas himself in his garage but has just remembered he parks his car on the street because he can't afford a house with a garage. 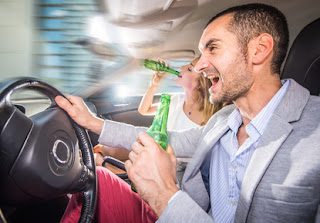 These two high-spirited authors are on their way to a writing convention. He writes action thrillers and she writes erotica. This photo was captured on the M25, just before they caused a massive pile-up when he decided to act out the car chase scene from his latest novel, "Dead Broker."