There's no other way to say it. I had a miserable day yesterday when my pet chicken, Miss Agatha, died.

She was a chicken like no other. For a start, she had a partially severed claw which, no doubt, was the reason why she was the only West Sussex available at the farm we purchased her from.

She also thought she was a cockerel.

Which was slightly problematic. Especially, if you're expecting a nice placid hen who makes an occasional cluck and generally behaves herself.

So Miss Agatha was definitely not a well-behaved hen. Every morning for the last four and a half years she woke me at the crack of dawn with her loud cock-a-doodling. In fact, she would cock-a-doodle anytime she fancied some attention. (Which was a lot and particularly when in pursuit of luxury food items.) She was tenacious, stubborn and had no fear. She would chase off cats and other birds no matter what their size.

As the years passed, Miss Agatha would wander inside our home with increasing regularity. Her first stop was usually the kitchen where she would eat Mr Bond's cat food whilst he looked on with a variety of looks indicating his deep despair/loathing/false nonchalance/hunger. She would then saunter off to examine the rest of the house. On one occasion I found her laying an egg under my duvet and, on another occasion, on my pillow. Recently, she had taken to laying her eggs in an old cat basket in the lounge. For a housewife with an aversion to cleaning, Miss Agatha's mission to make my house even dirtier was my worst nightmare come true. (On the plus side it did lead to a jump in share prices for antiseptic toilet wipes.)

Nevertheless, despite the fact Miss Agatha was stir-crazy and determined to drive me insane it was pretty difficult not to get attached to her. She had a personality as big as any human's and, frankly, it was a lot bigger than that of some folks I've known.

I'm gonna miss her. Even the cock-a- doodling. (Maybe not the 4am stuff though.)

You know, I might write a children's story about Agatha sometime. Agatha immortalised on paper. I think she's kinda like that. I think I'll call it The Adventures of Miss Agatha Turley, Chicken Extraordinaire.

Email ThisBlogThis!Share to TwitterShare to FacebookShare to Pinterest
Labels: chickens

So the school holidays are upon us. The best thing about this is I don't get hypertension trying to get the boys to school on time and the bad thing is I am doing even more driving than usual. This is not good for the life expectancy of hedgehogs, rabbits and low-flying pigeons.

So we are now into the second week of the holidays and the boys and I are in the midst of their summer tennis campaign. In between the driving and competing I am trying to manage my publishing endeavours, write and do all those other things that mothers are supposed to do. (Excluding ironing which I try to avoid as much as possible - it's the feminist in me.)

And the rest of the time I am trying to catch-up with the TV series Ashes to Ashes  which I highly recommend, especially if you want a taste of less politically correct UK in the 1980s and surreal drama, or string tennis rackets. Master Jacob, in particular, has a beast of a forehand and even though he is now restringing most of his rackets himself such is his skill at breaking tennis strings I still have to chip-in and string some when we are pressed for time. Stringing tennis rackets is mind-numbingly boring but unfortunately requires a lot of concentration otherwise it can all go pear-shaped. (Which in my case is quite often.) In fact I would go so far as to say that stringing rackets is a job that makes ironing seem almost pleasurable.

It annoys me when I have to be polite
And sound all erudite
When I want to be rude
Stick my fingers up and be crude
It's such a pain being an English Rose
Who would never pick her nose*
Sometimes I want to say naughty words
And call people nerds
But I don't
Cos I'm nice
And always think twice**
I also write particularly bad poems
Not even half as good as Wilfred Owen.
Who was very unlucky and got shot
Whereas I have just lost the plot

*in public
** only sometimes

My Analysis of Recent Articles at The Guardian

Blimey, I haven't even had time to write my list of lost things yet and The Guardian are already banging on about feminism again. Apparently, it's not okay to call women "girls" but it okay to call men "boys."

Surely, there's more to life than that to complain about? I can think of some really big issues worth having a rant about. I could even make up some stories to rant about. Maybe about something I've lost. (Not a ring obviously - see last post.) How about when I lost my virginity? That's got to be a hell of a lot more interesting to just about everyone including feminists and misogynists.

Anyway, I am happy if a man wants to call me a "girl." The fact that he would probably be 95 years old, blind and suffer from senile dementia is irrelevant - it would still make me feel young and sexy.

The Guardian are also whinging about the niceness of the Royal Christening photos today. What bores. Anyway, I can't take that article seriously as it's written by someone who is clearly an Elvis impersonator.

Anyway, being an expert in analysis I have created this pie chart so you can easily see for yourselves what is happening lately at The Guardian. 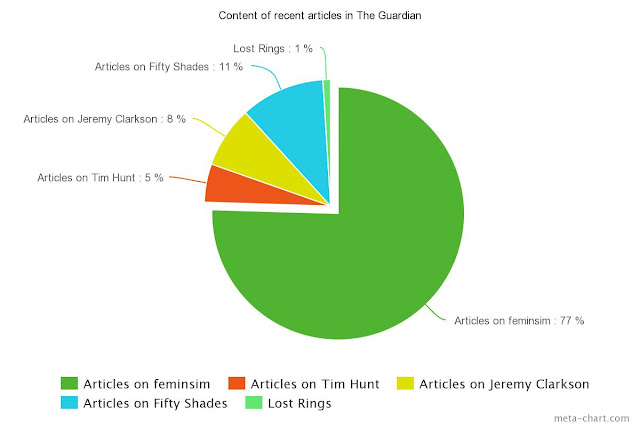 What the hell is going on at The Guardian?

For the benefit of you folks abroad, I must first explain that The Guardian is meant to be a bastion of British newspaper intellectual reading. However, of late, I've had some weird clickbait stuff feeding into my Facebook stream which has caused me to react rather like this:

"What the heck? Did I click on The Daily Mail in error? Oh crap. I didn't. It is The Guardian."

"No really? Another article on feminism?"

"Hmm. What? Another article on Jeremy Clarkson and Top Gear? "

"Okay. This definitely looks like a clickbait article. Let me see...uh-huh...okay...so sexual deviancy in feminists is fashionable. Hmm...where's that link to The Daily Mail?"

"Hmm. What another article on Tim Hunt? Leave the man alone, he's a nobel prize winner. He made a poor joke - he didn't massacre innocent babies! I'm going to stick my head in a bowl of sand in a minute. But first, I'll have a quick look at the culture section..."

"Oh God. Not another article by Matt Haig on depression. Yes, yes I know it's good to have these things out in the open but, come on, some of us authors are trying to be upbeat about not selling like E L James. We don't need kicking when we're down!"

Okay so you get my drift?

So you see all that repetitive stuff at The Guardian has been getting on my nerves. However, none of those articles, which even if a bit repetitive are generally well written with an informative or intellectual stance, can compare to THIS article I read a couple of days ago. I suggest you pop over and read it.

I said WAKE UP.

Yep, it's official. That article is the dullest article in the history of British newspapers. Basically, to sum up - a woman loses a ring, finds it, loses it again and then finds it.

That's the sort of ludicrous crap you read on my blog. (But hopefully a tad more entertaining.)

Anyway, I hereby crown the author of the piece with my newly created Mrs Turley Awards for Writing as the winner in the "Dullest Writer of the Decade" category.

Let's pray to God (and to Buddha, Zeus, Jehovah, John Lennon and Kevin Pietersen) that Mr Turpin never writes a work of fiction.

To think Tolkien wrote 4 epic awe-inspiring books about a lost ring. Obviously, Mr Turpin didn't take any influence from Tolkien. I'm not sure where Mr Turpin might have taken his influence from - maybe he was just sitting on the bog and couldn't think of anything but shit? So that was all that came out?

Okay, I'd better drop this subject now or people will think I am a meanie.

However, I will be back tomorrow with a list of all the things I have lost. It may be a substansial list.