Just after Christmas I realised I've actually been blogging for three years and today marks my three hundredth post. Hoorah!

It's actually quite hard to believe I'm still scribing this blog, which started out as nothing more than a whimsical notion to find a creative outlet, but I am. I'd like to think there's something meaningful in that achievement but the best I can come up with is -  I probably like the sound of my own voice too much!

Anyway, in honour of this momentous occasion, my original intention was to write a short summary of the highs and lows of my life and blog over the last three years - of which they have been many. However, I'll be honest, that's too much like hard work and I'm far too lazy. So instead I'm having a caption competition!

(However, if you really want to find out more about My Witty Ways it's all here in my blog posts - over three years of madcap but hopefully humorous ramblings, punctuated by the occasional moments of despair, melancholy and even on rare occasions, sanity.)

So, back to the caption competition.

The picture below is one I came across at my friend Eddie's photography blog The Cliffwalk - so thanks to Eddie for letting me have use of it. Now, I'm expecting some active audience participation on this post. So, as an extra incentive, I will award some grossly cheap and tasteless prize to the winner- as well as writing them a blog post on any subject they choose!

I will also arrange for you to have a signed copy of The Ascent of Isaac Steward the debut novel of my editor at The View From Here, Mike French, which is due for publication later in the year.

How's that for an attractive proposition?!

Now be warned, Readers, I have already come up with some captions and I am not adverse to awarding myself prizes - so you've got to get your thinking caps on. Don't forget you can comment anonymously - but if you think up a highly original name for yourself as well, you'll be upping your chances of winning!

Okay, so here's the picture and some of my captions: 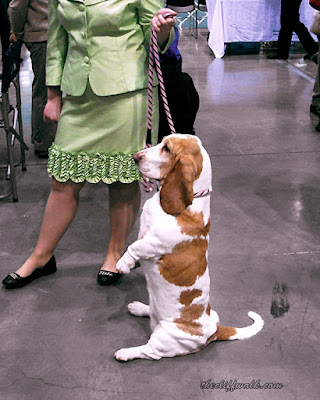 Bruce apologized to his owner for mistaking her for a bush.

Bruce had an appointment with the pet psychologist - and not a moment too soon.

Bruce knew he'd done wrong when he saw the red hot poker coming at him.

Bruce wanted to join the army but they didn't accept three-legged dogs.

Bruce plonked his arse on the coin; another fifty pence and he could afford a coffee in Costas.

Bruce thought he was a dog and then he saw his lead; he made another appointment with his psychologist.

Bruce remembered that old saying pets look like their owners. He looked at his owner's legs and then at his own... and sighed.

Bruce wanted to raise his ears but he was worried he might take-off.

Right, that should give you an idea of what I'm after - so give it your best shot!