My First Attempt at Jam

Is the full moon over yet folks? I couldn't tell with all that cloud cover last night. But I can't stand much more of this cleaning lark. Yesterday, I was forced to clean out the fridge and, as a consequence, for the first time in my 46 years I did what millions of women have done before me - I made jam.

Now, come on, avoiding making jam for 46 years is pretty good isn't it? Especially when you're a full time housewife. If it takes me another 46 years to build up the courage for a second batch - I wouldn't actually do it - as I'd be dead. A comforting thought.

Anyway, I followed this recipe which was the first hit that came up on Google (you can tell I did a lot of research) and I made the sticky stuff. I got a bit confused with how long I had to boil the fruit and sugar for until after about 90 mins I realised that the preparation time said 70 minutes so by a process of deduction if it was 60 mins for simmering the strawberries before adding the sugar, the boiling time need only be 10 mins. So since I'd already simmered the strawberries for 90 minutes (just to be on the safe side), boiled it for a further 90 minutes, plus another 15- 30 for generally making a sticky mess, making little paper thingies and and sterilizing jars, all in all, it was just short of 4 hours for 3 and a half pots of jam.

Hmmm.... it's probably just as well I don't do this kind of stuff often. I wouldn't win any prizes for output.

So here's a piccy of my first attempt at jam: 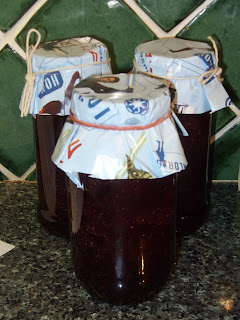 I should point out that I had none of those pretty paper things your suppose to put over the top so I made my own with some Star Wars wrapping paper. George Lucas would be proud of me.

Now, I did think about auctioning off my jam for charity but then I got a little worried that during transportation things might get a little...runny. I'll check it out tomorrow - since it's boiled for so long it might actually be so hard that folks will break their teeth on it.

Anyway, the boys ate the half jar last night. All of it. Master Jacob said it was "the best jam I've ever tasted."

Email ThisBlogThis!Share to TwitterShare to FacebookShare to Pinterest
Labels: My first attempt at Jam, The Wicked Ways of Mrs T