Showing posts from November, 2011
Show all

On the Morning Watch

November 21, 2011
Well just to keep you informed I did eventually manage to get some sleep between 5 and 7am this morning. I'm not sure exactly how much but I was sleeping when Mr T woke me up with his usual endearment;


"If you don't get up the boys will miss the bus."


Interpret as you will.


Well the boys did catch their bus. Master Jacob had no school tie though and neither of them had brushed their teeth. Hmm. I hope my dentist isn't reading this; he gives me a really hard time if they're not brushing properly. It's like the Spanish Inquisition at my dentist. How many times are you brushing? Left to right? Gums? Backs of teeth? Electric? Blah, blah, blah, blah. It's enough to shock any decent mother into lying.


So anyway, I did actually get some sleep and because I was woken up suddenly I can also remember what I was dreaming about...


So I dreamt I was a secret agent during World War Two. (O…
2 comments
Read more

On The Night Watch

November 21, 2011
Three small sherry sized glasses of wine and 2 cups of non decaff and I can't sleep. That'll teach me.  Who knows what I'd be like if I did drugs if this is what mere wine and coffee does to me. I can't sleep at all. Nope, not a wink. I can't even imagine what taking some LSD or such like would do to me - forget the hallucinations I'd probably have enough energy to swim the channel and back. I know that sounds impossible but if David Walliams can swim the Thames whilst he has tummy trouble I reckon I can swim the channel with insomnia.
You know, I keep wondering what the inside of David's wet suit looked like while he was swimming. I'm not having pleasant thoughts.
Maybe he wore a diaper?
Still, at least my kids don't suffer from insomnia. If they did I reckon they'd be pretty shocked to discover on Christmas Eve that Santa is a cross dresser and looks like a middle aged women with an addiction to cotton wool.
I should be in the secret service. If …
Post a Comment
Read more

It's a turkey Jim, but not as we know it!

Gosh. This morning I learnt a very interesting fact about my American friends.

They deep fry their turkeys!
And I thought Bush had just been pensioned off.
Oh come on. Don't get grumpy with me. It's just a joke! We have turkeys too in this country. Most of them have wings though. However, I'm prepared to believe Blair and Brown were turkeys and what's more I'm prepared to deep fry them too. In fact, I'd been happy to spit roast them.
Nothing like a red hot poker and a politician with his pants down to bring a smile to my face.
Yep, so I came across this video starring the lovely William Shatner of Star Trek fame on the subject of  deep-frying turkeys:


Right. I'm coming clean. I kinda have a crush on Bill Shatner. I don't think I've ever got over that original Star Trek series and I've loved just about everything he's ever done  - even T J Hooker. I'm not sure what that means - maybe I just have bad taste? But I do love his self-effacing …
6 comments
Read more

Is a Blog a Liability?

How do I know this? Well this morning I spoke to my good friend Mrs B who said to me;

Cue Mrs T getting all excited. A job suitable for Mrs T? There's not many of them around! I did think about applying for a job as a school chef a short time ago but I'm not good at cooking and I don't want to be associated with lumpy mash potato. Anyway, I decided to quit while I was ahead - I mean nobody likes to get sacked - so I saved myself the anxiety and didn't apply in the first place. Now I know you lot probably don't think I'm that bad at cooking so I might as well tell you that recently Master Jacob lodged a formal complaint about my toast. Apparently, I burn it. Hmm...and I just thought it was "well done."

Humph. I like my toast "well done". Who wants soggy toast? Not me. I hate toast that's all limp and drips marmalade down your tee-shirt. I used t…
2 comments
Read more

The Bike with One Big Wheel and One Small Wheel 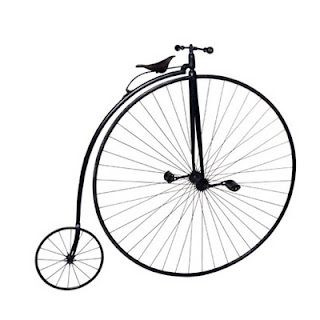 Not so long ago I wrote a post called On Yer Bike which related a story about how Master Ben had asked me if I had a bike with "one big wheel and one small wheel" when I was young.

Now Master Ben is 10 years old. It is acceptable for him to not know the correct name for such a bike.

However, it has come to my attention that across the world almost daily people are Googling "Bike with one big wheel and one small wheel" and arriving on my blog.

Obviously, I am hoping they are all school children. However, as I am nothing but generous I am now delighted to finally make use of my history degree by informing the world that the "Bike with one big wheel and one small wheel" is actually called a ...

Now for a small fortune I will regale you with the story of how my grandmother invented the Penny Farthing. (You may recall my story of how she also invented the rugby ball.) However, if you want the truth just try Wikipedia or a history site. I'm no…
8 comments
Read more

November 04, 2011
I think this story  is most one of the most entertaining stories I've ever read. Certainly equal to the story about the woman who knocked herself out on her loo roll holder.

Apparently, a cleaner in a German museum mistook an exhibit for a big mess and cleaned it  up. The exhibit was entitled "When It Starts Dripping From the Ceiling" and featured "a tower of wooden slats under which a rubber trough was placed with a thin beige layer of paint representing dried rain water."
Personally, I think the cleaner deserves an award; if the art looked like a pile of crap it probably was. It's hard to believe it had a price tag of 1.1 million dollars attached to it.
Hmm.... maybe it's an inside job. Perhaps the museum just got tired of seeing a stain on the floor and decided to fake a claim? I mean a stain on the floor and some old slats is hardly a Turner or a Picasso is it? I reckon they just got fed up with having to walk round the unsightly mess and just got som…
4 comments
Read more
More posts