Blogging A to Z: X is for X the Kissable Letter

It's time for one of those really tricky letters;

Now in order to get some inspiration for this post, I went onto one of those online dictionaries to look at words beginning with X. Sadly, this left me rather depressed as I didn't know most of them which is a tad embarrassing because, at my age, I should probably know more x words other than Xmas and xylophone. Anyway since it's nearly 11pm and I am too lazy old to absorb new information, I've decided  I'm going to simplify the matter and just talk about the letter X all by itself! Hurrah. I love keeping things simple!

Okay, so X  by itself is often used as an abbreviation for "Kiss". Sometimes girlfriends end their texts, emails and letters with a X as a sign of affection but they never do that with a man unless they are in luvvvvvvv - otherwise it might give a man the wrong idea which might be a bit tricky if he turns out to be a Justin Bieber fan. Sometimes when women are really, really in luvvvvvv they do even more crazy things like this:

X is also used as an abbreviation for the saying "X marks the spot" which is a way of identifying a particular place. For example, X would mark the site of a treasure chest on a map.

Similarly, I have an X on the front of Mr T's cheque book, his share certificates and his life insurance policy.

X is also used as a signature if you can't sign you name. I have seen this done twice. The first time was when I worked in a shop and a customer needed to sign their name on a receipt. The second time was at a pub when UKIP leader Nigel Farage was signing his tab. (That's a bill behind the bar.) I was surprised Nigel could only put an X on the tab but, then again, he was standing next to Labour leader, Ed Miliband who had put an "O" on his tab. Maybe Nigel thought he was being clever? Hmm. You know, it might have been a Westminster night-on-the-town as David Cameron and Nick Clegg were playing Paper, Stones and Scissors across the otherside of the room and the leader of the Scottish National Party was wearing a funny skirt and blowing raspberries.

Anyway, it will come as no surprise to my UK readers that our MPs ( Members of Parliament) and politicians get up to all sorts of tricks when they're relaxing, especially on Fridays, now that we have taken up the US tradition of "Dress Down Friday" where folks relax a little at work by wearing casual clothes. Anyway, I found a picture of Nigel Farage on the last Dress Down Friday. I thought you might like to see it. 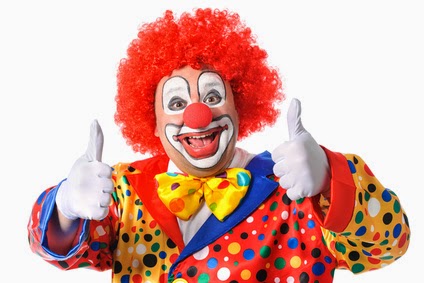 A is for Arses and Aidan   B is for Bullshit  C is for Chinese Crispy Duck and the Conservative Party.  D is for Diarrhea, Dinosaurs and Depauperation  E is for Eulogy for the Earth  F is for Ferrero Rocher G is for Guns and Girls   H is for Hope and Horny Jelly Men
I is for Igloos, Ignorance and Iguanas   J is for Jason Statham   K is for Kings and Kinkiness
L is for Love, Loss and Laughter, M is for Moaning and Monopoly, N is for No, O is for Oranges P is for Johnny Potato VC R is for Random Musings, S is for Snot T is for thongs U is for Uranus V is for Voters and Voting, W is for "W" words that really annoy me
at April 28, 2015