Blogging A to Z : C is for Chinese Crispy Duck and the Conservative Party.

First of all I want to establish that I think ducks are just great. They're pretty and that quacking is kinda cute. But, let's be honest, folks, they are pretty good on a plate too. Especially, Chinese crispy duck. I just love it covered in plum sauce and wrapped in a pancake.

However, I have some disturbing news which will be of special interest to my UK readers.  Sadly, I've heard on the grapevine that Chinese crispy duck in the UK might soon be in short supply.

Calm yourselves, readers. Breathe deeply into that paper bag.  I know you're probably mortified by that news but, remember, panic attacks are strictly for creative types like me - the rest of you need to hold the world together and prepare for that inevitable alien invasion cos us creatives are going to be no bloody use - we'll still be panicking over a misplaced adjective.

So anyway, I heard this rumour about Chinese crispy duck because I have friends in very high places. Very high places indeed. And what I heard was that as the UK parliament is now dissolved, the Conservative party (traditional right-wing party) and that the United Kingdom Independence Party (barking mad even more right wing party) are in secret talks about the possibility of forming an alliance if there is no clear winner after the general election in May.

So what has this got to do with ducks?

Well my sources tell me that the Conservatives are planning more stealth taxes to penalize the workers. Not just more taxes on cigarettes and beer but more taxes on Chinese crispy duck.

How wretched is that?

Now this joint tax and embargo will have a catastrophic effect on the UK duck population. Inevitably, as ducks become rarer, poachers will steal the protected ducks from their nests and flog them to the highest bidder. Chinese crispy duck will escalate in price until it beyond the price of the average worker and, worst of all, British ducks might even become EXTINCT.

Haven't we workers suffered enough in this depression? Must we suffer more at the hands of such an extreme and brutal government? I am gutted at the thought that not only will our beautiful English ponds be denied the presence of our feathered friends but our plates too. Millions of workers who enjoy their Friday night crispy duck will be driven to despair and depression. Thousands of Chinese restaurants and manufactures of orange and plum sauce will lose their jobs. There will be riots on the streets, the whole country will be brought to its knees because of a cruel and heartless government.

It's an awful scenario. It doesn't bear thinking about. But we must, dear readers, we must. I have never used this blog to sway public opinion but now I feel it is my duty. So, for the sake of the working man and his right to eat low-cost Chinese crispy duck, I ask you to join me in my latest venture.

You see, readers, yesterday I did the most daring thing I have ever done. I went down to the local council offices and I registered a new political party - The Chinese Crispy Duck Preservation Party. I am going to rally housewives and fans of Chinese takeaways all over the UK and we are going to march on Westminster waving our tinfoil cartons and pinafores. We will draw attention to this wicked collaboration the Conservatives and UKIP are planning and their evil scheme.  Once the potential lack of Chinese crispy duck is brought to the attention of the rest of the UK, I am certain my fellow Brits will rise up with me and The Crispy Duck Preservation Party will be elected as the governing party and forever oust the Conservatives, UKIP and all the old miserable two-faced parties and their lying, cheating ways.

It is time for change in this country! Join me, The Housewife Extraordinaire, and The Crispy Duck Preservation Party and let's get rid of these miserable bunch of self-serving tossers! 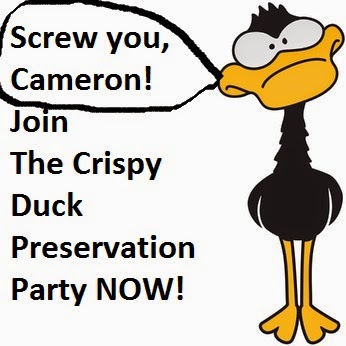 You can check out the other participants in the blogging A to Z HERE. And if you want to offer up a subject for tomorrow's post beginning with the letter D please leave a comment!

Previous posts: A is for Arses and Aidan Turner
B is for Bullshit.