Blogging A to Z: S is for Snot

Right, here we go. It's 10pm and I have a tube stuck up my nose and down my throat and I feel like this; 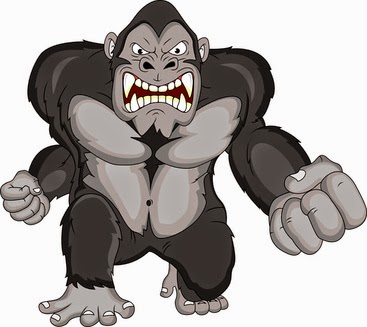 Consequently, it's possible this post is going to be very brief and even vulgar. This is because the tube shoved up my nose this afternoon has to stay in place for 24 hours and my nose has been running constantly since then. I've got through a week's supply of loo roll since about 4pm.

I'd post a picture of myself for some extra sympathy (who doesn't love a bit of TLC) but I'm vain and I'm not at my most attractive at the moment. So just imagine the gorilla above with earrings, a tube up his nostril and taped around his face and that's pretty much what I look like.

The hairy legs are almost identical too.

It's hard being a brunette sometimes. People don't realise what we have to go through. All that shaving and waxing is very tedious. I've never waxed my legs though - I'm too embarrassed at the thought that someone might see the wax strip covered in hairs and mistake it for a shag pile rug.

So anyway, let's talk about "snot". It's pretty gruesome stuff isn't it? Especially when it's pouring out the nostrils of a small child. Now, not naming any names, one of my boys had a bit of a snotty habit when he was a toddler and he used to wipe his snot on the bedroom wall next to his bed. Ugh. I had to scrape it off with a knife. I know - pretty disgusting - but what was I to do? I could have painted over it in a deep shade of green, I suppose, But I couldn't face the idea of knowing it would always be there. It would be like a cold sore. Always waiting to burst forth at an expected moment. You could bet your life that had I not scraped it off, if a relative had slept in that bed, a giant snot-spot would have suddenly erupted from beneath some peeling paint.

Yikes. This is a rather tasteless post. I'd better end it here. This tube is getting the better of my good nature.  Ah well. It can only get better tomorrow!

Ps I am quite well and have no serious illness. Just middle age stuff that needs sorting.


A is for Arses and Aidan   B is for Bullshit  C is for Chinese Crispy Duck and the Conservative Party.  D is for Diarrhea, Dinosaurs and Depauperation  E is for Eulogy for the Earth  F is for Ferrero Rocher G is for Guns and Girls   H is for Hope and Horny Jelly Men
I is for Igloos, Ignorance and Iguanas   J is for Jason Statham   K is for Kings and Kinkiness
L is for Love, Loss and Laughter, M is for Moaning and Monopoly, N is for No, O is for Oranges P is for Johnny Potato VC R is for Random Musings