It will not come as a shock to you folks that I am always getting into trouble. Well I've done it again - only this time it doesn't involve my car.
It involves my big toe.

Earlier today, I decided that whilst the boys were in the nets playing cricket and having a little instruction, I would have a bash too. Now, many years ago I used to play cricket (emphasis on the "many") and whilst I've hit a few tennis balls with the kids at cricket when they were younger I haven't done much with a hard ball in about... 25 years.

Probably not a good idea then to stick on pads and a helmet and have a bat. But hey, I wouldn't be me if I wasn't an idiot most of the time!

Yep, so I faced a few balls, struck a few and was beginning to move into "power play" mode (which for those of you not familiar with cricket terminology roughly translates as "swing wildly and hope for the best") when the cricket coach - fast bowler, ex county, club opening bowler  (Am I laying it on thick enough here?) comes charging in. It was a real beauty, swinging into me at about 90mph...at which point I thought...

I shall hit that for six over mid-on!

(Yes, I am delusional. Just bear with me.)

Anyway, I carried on for a while and then when I came off (dignity not intact) I pulled off my trainer and saw this: 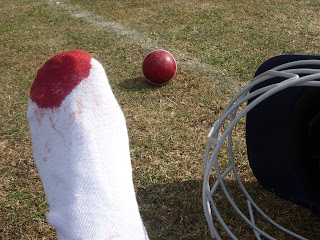 And just for once it was nothing to do with putting red pants in with my white wash.

Here's what it looks like a few hours later: 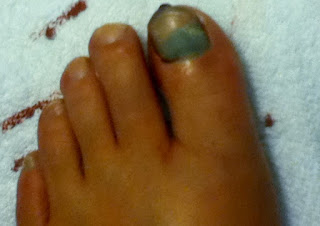 Ohhhh.... look at those little porkie sausages! Terrific war wound though. I am going to get some serious mileage out of this - especially when I tell folks how the ball ricocheted off my foot and knocked me out - resulting in my being airlifted to the local hospital to receive open toe surgery. (Unfortunately they could do nothing about my brain which, unsurprisingly, had already received irreparable damage.)
I love a good story.
Anyway, I now have a public apology to make. Poor Cricket Coach was very apologetic but being in one of my jovial moods, as I normally am, I later texted him and told him my toe had fallen off. I'm not sure he understood my humour... Anyway the fact that big toe hurts is my own stupid fault!
Hmm...I think tomorrow I'll text him and tell him I ate my toe with some beans and a nice Chianti.
I wonder if he'll believe me?
Hee, hee, hee...
at June 02, 2011