Wow! Yesterday, via the news, I came upon this site - a website where readers can vote upon the sexiness of our MPs. Boy, did I have some fun!

Now currently riding high at position no 13 is Joseph Johnson. Here he is;

Well yes, a pleasant looking fellow. Not sure if he's my cup of tea though. Anyway, remember that old saying "Look at the mother before you marry the daughter" - well I think the same applies to men - only perhaps it should be "Look at the older brother before you marry his younger sibling" So let's take a look at Joseph's older brother, Boris. Yes, that IS that mad fruitcake Boris, Lord Mayor of London. 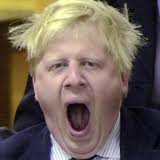 Hmm. Me thinks that if the lovely Joseph hasn't hooked up yet he'd better do it fast because when Boris's Alzheimer's sets in poor Joesph hasn't a hope in hell.

Here's some other interesting points..

The first Liberal Democrat MP doesn't come in until position no 65.  I'm wondering why that is...could it be that folks don't know which side of the fence they're sitting on?

Gordon Brown comes in at position 239. Seriously. No, I couldn't believe it either. There's either a lot of people out there with eyesight problems or us Brits have actually got a sense of humour.

David Cameron is presently coming in at position 164 (the double chin is holding him back) whilst deputy PM and Lib Dem leader is trailing slightly behind in position 174.  No surprise there - although I'm inclined to think there's some dirty play going on as it's an awful picture of Nick Clegg, who everyone knows is a real hit with the ladies.

Glenda Jackson (Yes, the actress, turned politician) is coming in at 619 which is in the bottom few. Now let's face it Glenda's got a real personality so that's pretty shocking. I'm wondering if folks are worried about her taking on too many acting roles? Although, if that's your cup of tea.....hey, it could be interesting...

Anyway, I had some fun looking at our MPs. I think most of them are pretty scary though. It's probably better to have sex with a blow up doll. At least if there's any hot air around it won't be a lot of political gibberish.

Alternatively, if you live in Wales, save yourself the cash and just go for a walk in the countryside.

Ps - I hereby issue a disclaimer. This blog does not belong to the real Jane Turley. Jane Turley is a pseudoynym for Barbara Cartland who may or or may not be dead although rumours have recently be circulating that she is living in the UK wearing a prosthetic nose and posing as a housewife of extraordinary talent.

Email ThisBlogThis!Share to TwitterShare to FacebookShare to Pinterest
Labels: Blow up dolls, look at the mother before you marry the daughter, non sexy MPs, sexy MPS