Have you ever made the wrong executive decision? I have. In fact I made one last Friday.

Let me explain. Well, I had a one of those annoying weeks where I just didn't get anything done so by Friday I was feeling a little down in the dumps but, nevertheless, I'd made plans to write in the morning and then go swimming in the afternoon. As lunchtime approached I was even thinking about removing all my excess body hair - cos you know it's just not acceptable for us ladies to have even a whisker of body hair in a pool - although it's perfectly acceptable for men to flaunt their body hair even if they look like an extra from The Planet of The Apes.

I don't want to lower the tone of the conversation - but there's something really unpleasant about getting a hair in your mouth in the pool isn't there? Ugh! I mean - you don't really know from whom - or even more importantly - from where it has come. On balance, I think it's worse than getting a hair in your meal at a restaurant - unless the chef's bald - and then you've got a real dilemma. Do you say "I've got a hair in my soup" and get accused of sabotaging the meal to get a free one or do you accuse the chef of cooking in inappropriate attire? Hmm. Tricky.

Anyhow, just as I was contemplating whether to use razor, wax or Immac or my personal favourite - just donning a scuba diving suit, when the telephone rang. It was the school - apparently Master Jacob had banged his knee and could no longer walk. Yes, the slight knock from the edge of a table was in fact a meteorite hurtling from outer space which had knocked him off his feet, pinned him against the blackboard and caused involuntary leg spasms and wobbly knee syndrome.

Yeah, right. Of course he couldn't walk. I can't sing either but I don't go around saying I've swallowed a set of bagpipes. Know what I mean?

Okay, I'm not saying the school have a habit of crying wolf but I spend more time at Master Jacob's school than the teachers do. He has had more bangs, scrapes, headaches and episodes of queasiness than I've had chocolate bars - so we are talking a SERIOUS amount. Frankly, readers, I nearly blew my top. In fact, I don't think there's actually been more than one occasion when Master Jacob has been genuinely ill. It's all this politically correct stuff. Yep, I can just imagine it now in the medical room...

"Now let me see, Jacob - you've stubbed your toe. Hmm...that means there is a possibility that you will have to have your leg amputated with may result in blood loss, transfusion, a heart transplant and a near death experience. Hmm...I'd better send you home."

Look, I know I don't work in the conventional sense - i.e I don't have a 9 -5 job but when are those clowns at school going to realise that I do actually do stuff that doesn't involve picking my nose between the hours of 9 am and 3.30?

Anyway, I was tad cross and Master Jacob realising that this was the last time he was going to get away with a faking offence naturally thought he'd better fake it some more. Kids' logic eh? So, by the time we'd got home, he was so poorly he had to take off all his clothes and retire to his bed to rest his leg and was suffering from an oncoming bout of dizziness. (Strangely enough he managed to take his lunch box with him.)

Okay, so soon it was time for me to pick up Master Ben from school and Master Jacob told me didn't want to come with me. (Possibly because he was now happily ensconced in his bed watching Horrid Henry.) I tried coaxing him but to no avail. So eventually I began to think that Master Jacob would be fine for 30 minutes whilst I was gone and reluctantly I made the executive decision to leave him by himself with his mobile phone, the neighbours alerted and with his solemn promise he would stay in bed watching the telly until I returned. I'd convinced myself that he was old enough and sensible enough not to get into any trouble.

Well, you've guessed it - I made the wrong executive decision. Yes, as I pulled up the drive on my return I noticed Master Jacob in the kitchen, fully dressed and doing what appeared to be...cooking.

Yep, Master Jacob was baking biscuits. Following the (dubious) success of his last attempt at cooking biscuits at school he had decided it was the time to have another bash. Indeed, by the time I'd got through the door he was already on his second batch. Sounds impressive huh? Okay let's take a look at the first batch........ 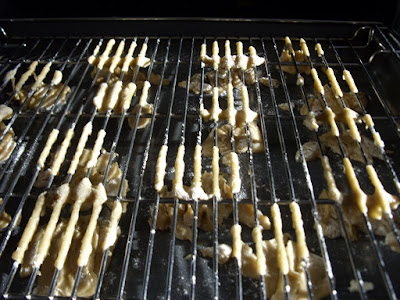 Yep, that's right Master Jacob had put his biscuits underneath the grill. That's impressively awful - even by my standards.

And you know what? Batch number two wasn't looking too good either. They looked kinda... sticky. 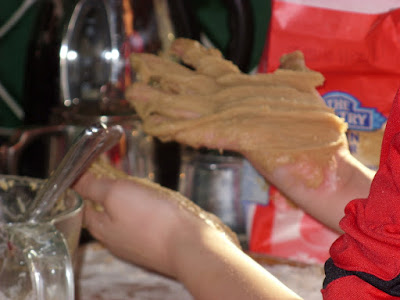 Okay - let me say that no amount of flour could salvage the second attempt. It was one step away from just being liquid which I would have thought was pretty difficult - bearing in mind as I was cleaning up Master Jacob said;

Whaaaat? What the hell did he put in it? The contents of the washing up bowl?

And if that wasn't enough, as I returned from cleaning Master Jacob's sticky little fingers in the bathroom I discovered Master Ben trying to make biscuits too. My kitchen looked like the fallout from a nuclear war zone. There was muck, utensils and flour everywhere. And I mean everywhere. 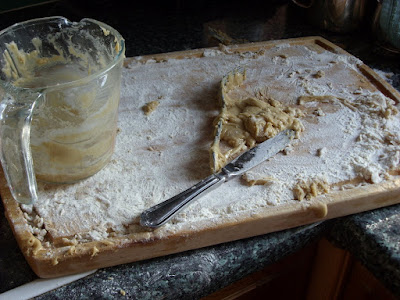 Yep, I made the wrong executive decision. It just goes to show that should never leave a child alone, even when you think it's safe to do so - and especially if you don't set a very good example in the kitchen.

Have you ever made the wrong executive decision? If so, tell me about it and make me feel better. In the meantime, please don't report me to social services......
at March 24, 2009