As this year draws to a close it has marked some personal highs and lows, the nadir being the unexpected death of my mother back in October.

It’s quite bizarre how sometimes you’re going about your daily business and then suddenly the enormity of having lost someone you love hits you. Memories once blurred become very vivid; sights, sounds and even smells come flooding back, swamping you in a current of unrestrained emotions.

Music has many associations for me and sometimes particular songs have stayed with me for….for as long as I can remember….

Years before my family had a record player my parents used to play cassettes on a radio/cassette recorder in the kitchen. We had a wonderful country garden and my father used to sit looking out of the kitchen window at the wildlife, the shrubs and flowers and the surrounding woods. I often wondered what he was thinking about for hours on end. Although he could be very funny and sociable at times he was also quite a quiet, introspective man who had contemplated the priesthood in his youth.

Music often played in the kitchen especially in those early days when it more commonplace to listen to the radio than watch television. Two artists that my parents listened to with regularity were Joan Baez and Charles Aznavour. I’m sure they were my father’s choice because they always remind me of him. ( I think it would be fair to say my mum was the funky one!)

A song that really reminds me of my father and which is one of my all time favourites is Yesterday by Charles Aznavour. It’s not the more well know “Yesterday” by the Beatles, but I’m sure you’ll agree this song is just as good, if not better. I love everything about this song; the melancholic reflective mood, the angst in Charles Aznavour’s voice and the contemplative moving lyrics. If I close my eyes to this record I can always see my father... and as I get older the lyrics become even more meaningful.

The version I’m playing is one Charles Aznavour performed live at The Carnegie Hall- I’ve heard him sing it substantially better but I think you’ll find it’s still a great song;

(If the video is not showing please try this link. My blog seems to be experiencing some interference.) 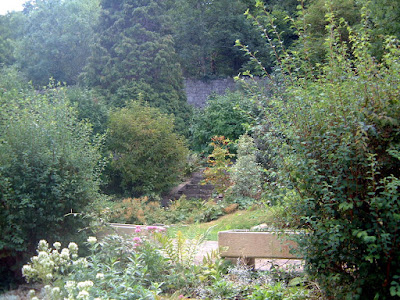 This is the view from just outside the kitchen window the day my mother and I said goodbye to our family home for over 40 years. In earlier years the garden had more trees; mainly fruit trees but there was also an oak my younger brother had planted as a toddler. The fruit trees eventually came down as they passed their life expectancy and the oak became diseased a year or two before this photograph was taken and that too had to come down. The garden probably returned to a more natural state. Backing onto the Mendip woods there was a proliferation of wildlife; woodpeckers, jays and even buzzards made an appearance amongst the more frequent visitors. Foxes and badgers made regular appearances and even the odd cow or deer peered over the back wall! 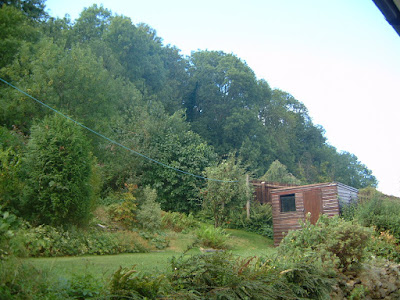 This is the skyline a bit further along from the kitchen, looking up to the woods; no wonder my father's favourite place was in his chair by the kitchen window.

Yesterday, when I was young.

Come join Music Monday and share your songs with us. One simple rule, leave ONLY the actual post link here. You can grab this code at LJL Please note these links are STRICTLY for Music Monday participants only. All others will be deleted.