J is for Jewellery, Jacob and Jinxes

So this post is going to stray from my normal gibberish and a be glimpse inside my life.

The alternative was writing about jelly which is far too wobbly and reminds me of my arse. So it's a no go area.

So if you've read my A for Anno Domini post you'll know that recently my life has completely changed. I thought in two years time, when my youngest son went to university, I'd go back to part-time work and pursue my writing career which although wasn't earning any significant amounts was on an upward trajectory - one of London's top agents had considered the full manuscript for The Changing Room and I'd had two top publicists interested in it too even though I decided when the agent eventually declined my novel to self-publish. In other words -by choosing self-publishing - I decided to put my money where my mouth is believing The Changing Room filled a gap in the market for women's fiction - contemporary humorous fiction for middle-aged women but which also had substance. Unfortunately, the first publicist, who had represented some of the biggest names in contemporary thriller writing, pulled out at the last moment due to "over commitment to her traditionally published novels" by which time, I'd spent already a £1,000 on a new cover at her request so it could be more commercially marketed. As you can imagine, I felt more than a little jinxed having now lost a top agent and a top publicist.

However, a second experienced publicist stepped in. My spirits lifted for a while but I soon began to realize that the momentum had been lost and even though she got me a commission with one of the national papers for this article, in the end, they didn't run with it. Why I don't know - I'm guessing it was either my humour or it wasn't controversial enough for their readers to do what that paper likes best - unleash vitriol in the comments. I'd thought very carefully about that article because it was such a great opportunity but I also knew it was always going to be a very difficult remit for a very controversial paper.

I guess you could say I felt a bit jinxed. My breakthrough moments as a writer had been lost. But overall I was still pleased - I'd gone from writing obscurity to obtaining the interest of a top agent, two top publicists and I'd micro-managed every aspect of my novel from the editing to the design and distribution. I'd gained the support of Whitefox, who were my go-between on the publicity front, who have since offered to represent me for my next novel at a very reduced cost having acknowledged certain aspects of the campaign did not go as they should have - and I know they are sincere. Ultimately, it was a huge learning curve which had cost me a few thousand from my inheritance but even now, two years on, I still think it was the right thing to do. Jinxes or no jinxes. What pleased me most though was the reaction I got to The Changing Room. There is room in fiction for laughter in the lives of middle-aged women. It doesn't all have to be chick-lit or Bridget Jones.

Yikes, this post is rambling on a bit. It must be the writer in me.

And so that leaves just jewellery and Jacob. Jewellery is what I work in now - many years ago I trained as a retail jeweller and worked in London in a prestigious store. I've had to go back in a lowly position after so many years as a housewife, but returning to London is now my objective - it is the only way I can help Jacob and my other sons financially in their immediate future.

Below is Jacob. He is the second of my three sons. He is dyslexic but wasn't diagnosed until he was in his last year of schooling, despite me banging on teacher's desks for years. Consquently, his academics are not strong and he has worked at his tennis to compensate and to give him a career. A few days ago, he signed a tennis scholarship with McPherson College, Kansas in the US. As our family unit has fallen apart these last few years one of my biggest concerns is that he and his younger brother might lose their opportunities in life but Jacob has been very lucky - the kindness and generosity of a relative means that Jacob will now still be able to go to the US. I will have still have to find some of the fees which, even with a scholarship and a donor, are very expensive but it is doable now. A few months ago I was crushed that it might not be possible. 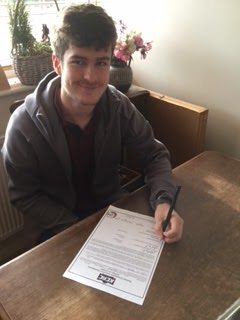 As for my writing, this is probably the longest thing I've written for some considerable time as my life is now so complicated. But what I know is this: I may be a mother, an employee and soon an ex-wife but I am also me and I am a writer. And I will not lie down and take the shit that has come my way anymore. I will live my life with love and laughter.

And I will write another book.