V is for Vacations

With the prospect of long summer evenings and some pleasant weather ahead I won’t be the only housewife fantasizing about lying on a beach, nibbling grapes, sipping Coladas and being waited upon by a handsome young manservant.

Unfortunately, when I’m in the middle of these and other exotic fantasies a whining voice asking an annoying question often brings me back down to reality. A recent example of this was when I had my hands immersed in the washing up bowl whilst dreaming about surfing with Damien Lewis when suddenly my thoughts were interrupted by the question every mother dreads;

“When can we go camping?”

Now imagine the onset of acute postnatal depression combined with the news that Daniel Craig has quit as James Bond and you will have an idea how such a question cuts me to the quick. What I’d really like to do in such circumstances is to stick my head in the oven. However, due to the small personages to whom I gave birth and who regularly attach themselves to my purse at the sweet counter, I have to abandon such thoughts and attempt the “Distraction Technique.” It goes something like this;

“Oh yes please, and when can we go camping?”

“You can have the sweets and I’ll put on that new DVD.”

“Oh great! And can I take my cricket bat with me when we go camping?”

“Why don’t we talk about camping later? These are your favourite sweets.”

“Daddy has been working hard lately. He needs a rest. Here, have a milkshake.”

“Oh goody. Strawberry, my favourite. When we go camping, can we stop at MacDonalds so I can have chocolate flavour?”

Okay, what I’m saying is the “Distraction Technique” which is usually a foolproof method of diverting children’s foolish escapades doesn’t work with camping.

What is it with kids and camping? It’s almost as an attractive proposition to them as Christmas. Thank goodness retailers haven’t reinvented Christmas in July. The thought of having to stick up streamers and Christmas trees in a tent is like something out of an Alfred Hitchcock film. Forget The Birds and Psycho imagine The Campsite…

The night before Christmas, silence reigns over The Campsite. A bedraggled mother is found hanging from an impromptu washing line. Children lie quivering in their sleeping bags. A man dressed in red is seen stalking the nearby flooded toilets. Who is this strange being? Is it Santa or a holiday maker with sunstroke? What dark and deadly secrets lie beneath the façade of The Campsite? Find out the horrifying truth this summer at a cinema near you!

Yes, you might have realised by now that to me camping is the most unappealing “vacation” ever. I use “vacation” very loosely in this context. In my opinion, no such thing as a “vacation” exists when camping. Indeed, the thought of using public conveniences or squatting in a field whilst the 7.15 express from Plymouth to Paddington hurtles past is about as seductive as spending the night in a mortuary. And no one mention those portable toilets; last time I went camping I thought it was an ice box and ended up with some funny tasting bacon and eggs. 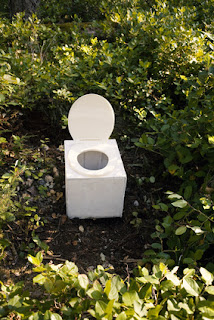 As for those so-called “inflatable” beds, have you ever tried sleeping on one with someone substantially heavier than you? Well, it’s like being at sea and being tossed up and down like a dingy. After spending a night on one with my husband once and alternating between bouts of seasickness and nightmares of being trapped inside a whale I was forced to go out and buy my own the very next day or (and this may come as a surprise to you) hang myself from an impromptu washing line. Anyway, those mattresses should be renamed. Something more akin to “The Slowly Deflating Mattress” would be more truthful. Yes, why is it that at 2 am when the water is trickling under the tent and there’s a force 10 gale blowing outside do they require pumping up? I think they should carry a government health warning;

Further, an extra warning could be added for increased awareness. I suggest something like;

However, camping is a positive for anyone who wants to follow the Atkins diet. Kids and men seem to love no end of sausages, burgers, eggs and beans at 8am in a field in the middle of nowhere. But after 2 weeks of a meat-only diet most women would outpace Paula Radcliffe in a sprint to the nearest Thorntons’ outlet. But if a race to Thorntons is out, you could always join the race to wash your dishes at the nearest available standpipe which makes the chore of stacking the dishwasher seem quite blissful. Yes, it’s remarkable how all those things you took for granted like prepackaged pizzas, loo roll and a shower that doesn’t conk out when you’ve got soap in your eyes, suddenly acquire luxury status. 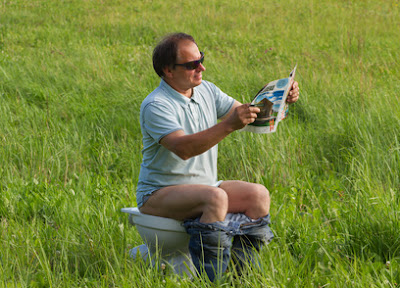 Sadly, camping seems to appeal to most men. This one is even reading Camping Weekly which may have come in handy since he appears to have forgotten his loo roll.

Now it would be unfair of me to imply all women don’t like camping but I did do a survey amongst my friends and acquaintances and only one lady actively enjoyed camping. After some pertinent questions, I deduced this was due to an indecent amount of alcohol and a failing memory. Admittedly, these are probably very useful assets when camping. However, I’m not sure if I like the idea of wandering into a stranger’s tent in a drunken stupor and asking if I can have a ride on their boat.

Anyway, this year I’ve taken the precaution of booking a vacation abroad, so I’m saved from yet another trip to hell and back. Well, not unless you count camping in the back garden. But hey, whilst my boys are frying their bacon and eggs I shall have my feet up and be daydreaming about that tasty young manservant.

I wonder what it would be like to get stuck in the outback with Ray Mears and a Pina Colada?

Ps I cheated on this one as it's an article I wrote for the BBC a while ago. Due to a severe lack of time today it was this or nothing! Tomorrow, hopefully, I'll have a bit more time to write an original post!