I have had too much white wine

I've been up since 5am - who can blame me? So I am currently working my way through a bottle of dessert wine which is 16% proof. The fact I can type is actually a miracle. Thank goodness for spell checker. God may have made man in 7 days but I reckon on the 8th day he made spell checker. Don't you just love him?

Anyway, Mr T believes I am working at my writing. Which, of course, I am - as blogging is writing. Of sorts. Still, it's a good learning curve. That's what Quasimodo said when he reached the top of the bell tower. He was also pretty knackered. But then again, that's what happens when you stuff your shirt with a bale of hay and 2 chickens.

I should say that when I have had too much wine I am liable to say anything. Which is why I restrain from such decadent behaviour on a regular basis. It's also because I have a prenuptial agreement.

You know, one of the funny things I've noticed over the years when I'm a bit tipsy is that I have amazing powers of recall. I mean most folks can't remember where they live or who they are married to (which could be pretty embarrassing) but I have a weird habit of recalling the most bizarre things. One time, I even remembered where the bathroom was. Another time, I remembered my that knickers go underneath my trousers and not on top.

Alcohol does strange things to the mind. You only have to look at Ozzy Osborne to see that. If ever there was a good reason for me to stay sober it's the fear of ending up looking Ozzy. Although I have to say that after I've worn my mascara for more than about 30 minutes there's more than a passing resemblance. You know, I have tried almost every mascara possibly (for less than ten pounds) and they all have the same effect - I look like Ozzy when he wakes up in the morning, turns over and sees he's sleeping next to Sharon. Say no more.

Anyway, if there's any retailers out there who'd like to send me a wagon load of mascara please feel free to do so - I need to blacken the wood stove. You know, isn't it annoying how all the celebs get all these free gifts? I mean they can afford to pay full whack for them whereas us poor fools have to cough up the full price. That's PR for you. Apparently, Karl Lagerfield has just sent singer Adele a whole load of his bags as way of apologising for calling her "fat" - which okay is not very nice but well it's not if it doesn't have a smidgen of truth in it. I guess it was a nice gesture to make up for being rude though - although I'm thinking he did rather play it safe by sending accessories and not clothes....

Oh no - my wine bottle is empty! I have no choice now but to go to bed and rest my weary head. No doubt I will be up early tomorrow to let the chickens out. (More on that at a later date.) In the meantime, I leave you with a recent picture of myself and the two younger masters - and believe it or not I was actually sober in this picture - which if you think about it doesn't bode well. 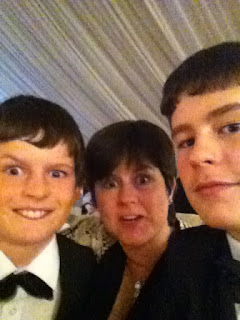 Master Jacob:  I can't believe I am related to these two idiots...