I can talk to the animals!

It's true! Yes, during the Easter holidays I took Master Benedict and Master Jacob to Whipsnade zoo for one of those delightful family excursions where by the time you get home you are wondering what on earth you were thinking about when you decided that procreation was a good idea.

(Note: In my opinion it is always wise to keep a set of divorce papers handy for these situations - you maybe be able to swing yourself a better deal - especially if you were foolish enough to sign a prenuptial agreement. I haven't actually managed to swing it myself yet but I've got a outing planned to LegoWorld which might just do the trick. I hear all those little bricks can cause a lot of frustration.)

Strangely, whilst I was at Whipsnade Zoo, I had one of those bizarre experiences similar to the one I had on the ferry crossing back from my holiday in Ireland. When, if you remember, for some unknown reason the perfumery counter started talking to me. I'm beginning to think I have telepathic powers. I don't know why I've developed them but it all started with the stabbing pains in my head...then the voices began...and then things just started talking to me. Often they were supposedly inanimate objects. For example, I'd be in the shopping centre, minding my own business, and then I'd hear whispering...

"Psssst....Mrs T, over here! Over here in the shoe shop! Oh, I'm so lonely in here Mrs T. The horrid teenagers keep splitting me up from my twin and sticking me in this hot window. I'm so lonely and frightened. Please, please, please can you take me home so I can sit in your nice cool cupboard with my sister. We'll be very well behaved..and you can wear us anytime you like..."

Well, what's a girl gotta do in these situations? How can she refuse such sad, pitiful talk? Especially as I'm such a sympathetic, charitable soul. Oh, and it was simply awful before Christmas when the pre-Christmas sales were on - so many poor hot little shoes crying out for attention afraid of getting crushed. On one occasion I had to rescue two pairs at one time! Poor, poor little things...I've tucked them safely away at the back of my cupboard so Mr T does not disturb them.

So that's how it all started. So anyway, there I was walking around the zoo enclosures when my ears began ringing. I shook my head trying to rid myself of the noise...but I could hear voices again which got louder and louder. I looked around me, totally bewildered, for it was not the voices of my children or my shoes or those lovely little notepads and pens in the gift shop...

It was the animals... 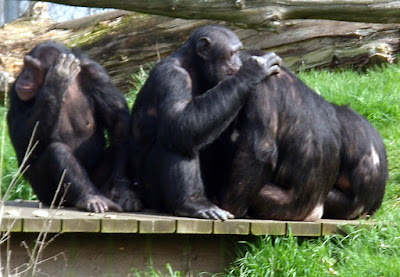 "Okay nobody look at that woman with the camera we've done our set poses for the day, let's get down to some serious grooming. You got the nit comb Gus?"

"Nah, lent it to Nellie over in the Elephant enclosure."
"Hey, she ain't even got any hair!"

" I dunno, something 'bout scratching her arse.

"Blimey, when are you ever gonna learn? Don't lend out the nit combs....now I'm gonna have to use my fingers again. Okay bend over, I see one of the little buggers...." 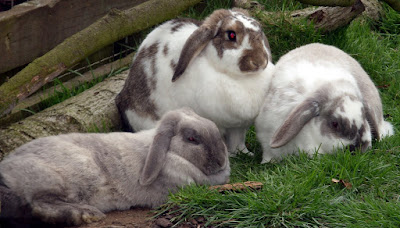 "Oh shit guys I think that's crazy Mrs T over there -the one who was on our neighbourhood watch poster; the sadist who pegged Flopsy to her washing line. Right, better keep your ears down and try to look hard." 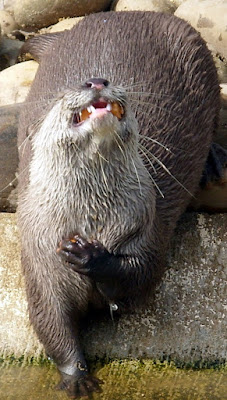 "Yo Mrs T! I hear you're good at scratching beavers. Would you mind? I got one irritating itch!" 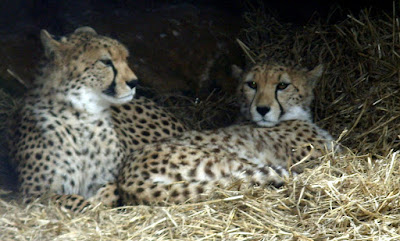 "Hey Rodney, there's that mad Mrs T the one who thinks she can run faster than we can."

"Where? I can only see the woman with the big arse. Can't be her - too much wind resistance. I'm gonna have a kip. Wake me when Carl Lewis comes past will you?" 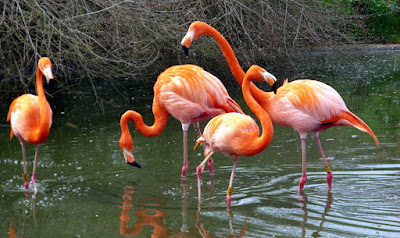 "Look Gerald, will you stop painting the aviary. Last week it was Hint of Lilac, now it's Salmon Pink. Your obsession with home decor is getting ridiculous...I'm going to report you to the keeper. Right, someone pass me the sponge."

"Hey Gnashers, you see that big arse over there? I could really sink my teeth into that!"

"What...you mean the the woman with the two kids and the tall guy?"

"I see what you mean. Could be a little fatty though."

"Ah who cares. My teeth need sharpening. Yo, baby! Yeah, you - the sexy honey pot. Over here sweetie, I got a surprise for you!" 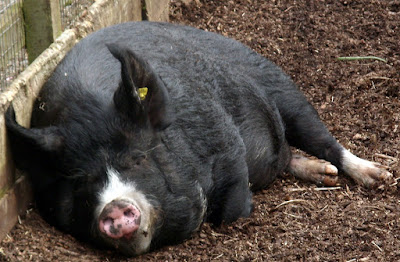 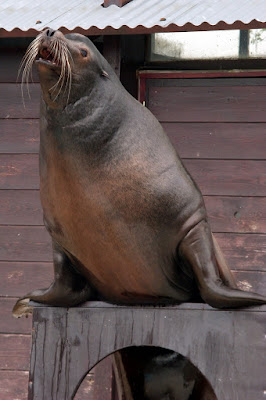 "Man, if I have to bounce another ball on my nose I think I'm gonna go mad. Ever since the 1966 World Cup it's just been balls, balls, balls. And I bet it's fish for supper again. And I can't even get my whiskers trimmed. It's just sub standard service here....I'm applying for a transfer to Woburn." 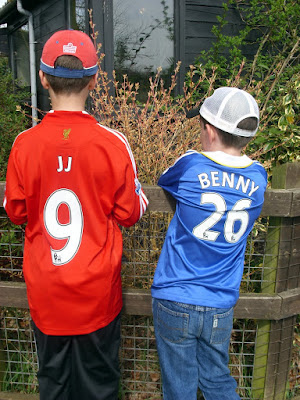 "Nah, she's way too busy trying to photograph the hyenas. I heard her talking to herself too. We got some serious problems when she gets old. You know we're gonna have to lock her up don't you?"

" You reckon? Do you think it'll cost much? She keeps saying she's not got enough cash for that gold plated tennis racquet I'm after. But last night I found a whole stash of chocolate hidden in the utility room. I ate some too, it was real tasty stuff."

"Man, you are dicing with death. She goes mental if someone nicks her chocolate."

"Nah, no probs; I put the wrapper under Dad's pillow this morning."

"Oh boy, the shit is really gonna hit the fan now! Hey you got some of that choccy left?"

"Yeah. Slip it over real carefully so she doesn't see. She's always saying she's got eyes in the back of her head."

"Is that why she always put her sunglasses on the wrong side of her head?"

"Yeah, she thinks it's funny. I just think she's mad."

"You know you could be right. Shall we start on the tunnel again tonight?"

Email ThisBlogThis!Share to TwitterShare to FacebookShare to Pinterest
Labels: I can talk to the animals, Whipsnade Zoo