Well I'm expecting the critique of my novel back mid May and then I'll be pressing on with finishing it so I maybe around a little randomly. (Unless it's totally panned where I will then be around more frequently while it forms a nice funeral pyre in the back garden.) However, for the moment I thought I'd use the time to catch up with all the posts I'm owing. So I'm going to start with The Honest Scrap Award which my dear friend Marie over at Nourish gave to me back in early February. Now it took Marie three months to accept her award before passing it on.... so what can I say... but don't feel bad Marie three months looks like the standard now! 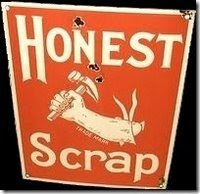 Now a condition of accepting this award is that I have to list 10 honest scrap things about me and 5 addictions. Now even though I'd read Marie's post I had to think what was meant by "scrap" in this context...I ummed and ahhhh and then suddenly the little light bulb (long life obviously) went PING! and I realised it actually meant "crap" - The "S" is a printing error! Sooo 10 crap things about me..... well that should be really easy......

1. I hate all these conditions that come with Awards! I mean I know it's lovely to spread the love but it's like being at school again. You know, when the teacher told you to do something you really didn't want to do when you just wanted to play .....

"Eat your mashed potato before go out to play!"

"Tidy up now, I want to see this room spick and span before you go out to play!"

"Have you done your homework? No? Right do it now before you go out to play!"

Blimey, teachers are just killjoys aren't they? When are they going to understand that school is about playing? Education....that's just an incidental.

So what am I trying to say here? Umm... I have a problem with authority! Yep, I would have been crap in the army. I'd have been arguing all the time with every instruction and complaining about my chocolate rations. In my defence I think arguing can be a useful asset-even in the army - for example I'd probably have argued with Field Marshall Haig "The Butcher of the Somme" during the First World War about his military tactics which could have been a positive. Of course, the downside of this is that I might have been shot for treason but hey at least I'd have got a last request!

" Double portion of Chocolate Devil's Cake please and tell Haig he's a ****** will you?"

2. I still have a pair of maternity knickers...and boy are they comfortable! (I'm not explaining why but I am not pregnant. So work it out.)

3. I am secretly in love with Gordon Brown. In fact last week I sent him a letter;

Gordon, Gordon, where for art thou Gordon? I knowest thou has mucked up the economy big time but I can forgive thee if thou comest to my bed chamber quickly. For I have tasted the vileness of poisoned chocolate and will soon fall into a deep eternal sleep unless your sweet lips do bring me back to life.

Ps. Don't forget to bring your dagger and stab yourself.

4. I'm just going to fake it when Gordon comes. And I don't mean that kind of "faking it." I meant looking like I'm dead so he stabs himself. I can't think of anything less sexy than the idea of making out with Gordon Brown. In fact just the name "Gordon" makes me feel queasy, so let's not even talk about that body. I've got principles you know. (Not many, but not having sex with buffoons IS one of them.)

5. I am not in love with Catherine Zeta Jones. I have never, ever thought about her and her stunning good looks and curvaceous body. And she is soooo gorgeous and talented I'm sure the fact that Michael Douglas is hideously rich and knew everyone in Hollywood had absolutely nothing to do with her trapping him. I mean "marrying him.".You see nice girls don't marry for money - I didn't.

Boy, have I made some mistakes.

6. Oh well back to my desk again....just for the heck of it. Currently I have 5 cups, 1 glass, 1 bottle of Apple and Raspberry Slightly Sparkling Spring Water Drink,(Glad they clarified the "water" bit - I was worried for a moment), a small bottle of Lucozade (For the sugar high) and an empty can of Diet Coke. I also have an empty bottle of Diet Pepsi on the printer. Now you've got to admit that is a "crap" fact isn't it? 10/10 for crapness? However, it may explain why I have an embarrassing problem when I sneeze.

7.When I was at Whipsnade Zoo I bought a little reusable bag. It's about 10 x 8, green and has printed on it "My Little Green Bag."

Wouldn't it have been funnier if the bag had been pink?

8. I have written to David Cameron, the Tory Leader, and said that I am prepared to support him in the next election if he promises to introduce compulsory facial hair checks for women over forty.

I think he'll get a lot of female (and possibly male) supporters.

9. It's a bank holiday Monday here which means the kids are at home. -We are NOT going to Whipsnade zoo - I received a letter of thanks. Apparently some ape hanged himself after our last visit. His suicide note said he was worried about evolving into a human.

10. All of this blog is a complete fabrication. My name is actually Gordwina Brown, I live in an institution for retired actresses in the seaside resort of Hastings. Most days I sit in my bath chair listening to recordings of Michael Jackson singing "We'll Meet Again - If Only I Knew Who I Was."

Right I pass this award onto Gary, Master Sy, PB, Georgie and Roxy The Dog; I have a tag for the girls later in the week and you'll be surprised as it has nothing to do with men. (Although I did contemplate it.)

Email ThisBlogThis!Share to TwitterShare to FacebookShare to Pinterest
Labels: The Honest (S)crap Award, The Wicked Ways of Mrs T