Little Miss Tigga (aka The Cat from Hell)

Yes, Miss Tigga was the ultimate Cat from Hell but you know folks I was more than a little fond of her. 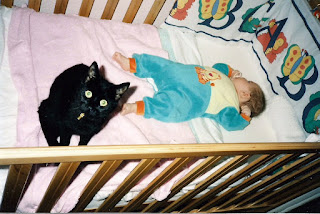 Above is a piccy of Tigga aged about 12 months, along with Master Sam aged about 3 months. As you can see at this stage she was still pretty curious about the new arrival and in this particular photo was staking her claim to be in no 1 pole position in my affections. Fortunately, after circling Master Sam's cot on top of the rails about a thousand times (she used to walk around the bath rim as well and once fell in) she realised he was not going to feed her and cater to her every whim so I didn't have many worries about her invading his space. Instead, Miss Tigga took to biting my ankles and scratching the doors for my attention.... sometimes if she was a little too enthusiastic I had a indoor plant spray that I was forced to use in the early hours just to get some rest!

I don't think Tigga grew any more after this photo and was probably the smallest cat I've ever seen. Quite often she would leap upon my back or shoulders when I was least expecting it and sit on my shoulder like a parrot where she would peruse the surroundings or make the occasional leap to the wardrobe for an even greater vantage point. My legs, arms and back frequently bore the scars of her surprise attacks; a more wily adversary could not be found! And I'm afraid that even Mrs T whose verbal wit has reduce many to the a jelly-like state was no match for Tigga, the ultimate Cat from Hell.

But you know folks, even though she drove me bonkers, especially in this last year as her health declined, I guess she'll always have a special place in my heart because her love was totally unconditional and I'm so glad that on Friday morning when she didn't appear I found her in time to say our last goodbyes. In the end it was just her and me - as she always wanted.

It's hard when you know the inevitable is waiting round the corner and the loss of Tigga, despite her frustrating ways, has been hanging over for me for a long time. There isn't a good way to die; I lost my mother suddenly and dramatically and my father in a long drawn out battle against cancer and medical negligence. Each was traumatic in very different ways. However, what I have learnt is that is very good to have those you love around you.

And even though she was only a cat, I'm so glad that I was able to be there for Tigga, my little feline friend.

Email ThisBlogThis!Share to TwitterShare to FacebookShare to Pinterest
Labels: Miss Tigga, The Cat From Hell