This is going to be a long post, so pull up your chairs, get out your biscuits and coffee coz this morning I feel in a crazy mood and feel like full scale whinging. Think Joan Rivers on heat and you'll be getting the picture.

Now where do I start? Hmm, I'll start with some girlie stuff. Now you blokes can read too if you want -you may find stuff out that surprises you.

(Note; I am still waiting for my expensive Bday "surprise" from the Good Mr T which apparently is being "imported." Hopefully not from Holland - although you can never tell with a middle aged man. They do weird stuff sometimes.)

Right, back to the girlie stuff - which I don't think I've ever talked about in detail before on my blog, just the occasional passing mention.

So okay, let's talk "The time of the month," PMT, perimenopause and the menopause itself.

What can I say? What the hell was God thinking when he inflicted this stuff on us (and men)?? Let's face it, The Omnipotent One should have known better. Now, as I mentioned in a previous post, he made us girls look well hot with our curves and men pretty silly with their dangly bits. But well he was having a bit of a laugh though with the hormone thing wasn't he?? Humph. So, men get to remain calm and collected all their lives whereas each month us girls are flying by the seat of our pants trying to either restrain ourselves from taking a pick axe to the shop assistant or sobbing in the car just because they've run out of carrier bags at the checkout. Is that fair? NO!

Yep, you see this PMT stuff either turns us girls into weeping wretches or psychotic nutters. For example, last month I was all ready to sign up for the Israeli army but then I broke down in tears and wanted to slash my wrists when I heard Jonathan Ross was quitting the BBC. (Um..no wait a minute that's what I threatened to do if he stayed.) Anyway, PMT does strange things to a woman; it even makes you contemplate going to the Parent's Evenings (I'll embellish on that at a future date) which no woman in her right mind would ever, ever, contemplate in "normal" circumstances.

Just to give you an idea of how things are in my household -When I have PMT Mr T tiptoes through front door at the end of the day not knowing whether he is going to live or die.

Okay - I admit I do kinda like that "power" feeling. It's a Mrs T thing; the knowledge that for a least a couple of days Mr T's not going nag me about cleaning is sort of like.... freedom.

(Oh, I should also point out that Mr T also looks good in a tutu - it's a condition of entry over the doormat when I have PMT.)

Hmm...talking about "freedom." Isn't it funny that "freedom" is what the manufacturers of some of the ladies products suggest you get when you buy their product. Yep, that's the "freedom" to go ice skating, parachuting, deep sea diving and of course abseiling providing you are wearing their product and either a bikini, tight white pants or jodhpurs.

Yeah, right. I do that allllllll the time. My day is soooo much happier knowing I can climb Mount Everest AND do the school run without having an embarrassing leak. In fact when I get home from the school run and I've not embarrassed myself I like to change into Mr T's tutu and swirl and dance around the lounge singing the praise of whatever product it is I'm wearing. Fabulous!

Oh yeah, and lots not forget the odd, skip and a jump. Just for good measure.

Anyway, when I get to those pearly gates I've already got my excuse lined up;

"Look God, I can explain the bad language, the shoplifting, the time I set the neighbour's cat alight, the hate Twitters to Ashton "Kushion" Kushter, the bad cooking and the time I choked on the wafer at Holy Communion .... I had PMT."

And you know what? I don't think God has a leg to stand on.

(And don't go telling me he's got wings.)

Right, so if PMT isn't enough us women get this perimenopause crap too. This is where you start going even more nuts and confused. For example; either very young men are attractive or very old men are attractive. There's no in between. Let me explain why;

Old men are attractive coz they don't expect anything from you except the occasional push in a wheelchair and you can get on with being a fruitcake and putting the linen away in the sink and the dishes in the airing cupboard and they won't notice. Or if they do notice you just say "You see what you've done to me?"

Young men are attractive cos they don't have either a) skinny arses b) flabby stomachs or c) double chins. And if they're about 18 and look like your son's best friend they probably haven't yet discovered the remote control which means they still might be interested in sex. (Unless they've got an Ipod or an Xbox.) Now since perimenopause is that last moment before the hormones give up the ghost, women think about sex ALL the time. Regrettably this means a few women are very unlucky and actually end up having babies. (Unfortunately not fathered by the 18 yr old males but by the gobsmacked spouse who couldn't believe his luck when you wanted sex on a night when there was no football on the telly, Carlsberg went into liquidation and the batteries ran out on the remote control.)

So perimenopause is a real downer, coz let's not forget the onset of severe facial hair resulting in acute physcological trauma, the cellulite resulting in a huge financial investment in abrasive hand mitts and, of course, the saggy boobs resulting in the need to go to bed wearing a Eighteenth century corset. So, all in all, a wonderful "period" of your life.

Then there's the menopause bit itself which is... ...when you're finished basically. BUT, if you're really, really lucky (and be grateful Ladies please) this whole peri/menopause thing may only last TEN WHOLE YEARS. So, not long then.

Pass me a gun someone. The thought is killing me. However, I don't want you ladies to feel too depressed - just think of it as a positive excuse to eat chocolate, get drunk and generally slob around without any comebacks from hubby. Now when I reach the menopause (which maybe sooner than average bearing in mind my current frame of mind) I plan to dose myself up on HRT and make out with Ashton Kutcher.

Oh wait a minute, Demi Moore got there before me. Oh well I was never interested in him anyway. It's the nappy that turned me off. Been there, done that.

Anyway, the good news is that after the menopause women become w i s e. Yes, indeed - WISE. Your body might be completely knackered but you are now blessed with a wisdom comparable with only The Almighty himself. Young women, children, even old men in wheelchairs will consult you, The Oracle of Wisdom. Yes, you will be able to impart your recipe for chocolate flapjack, short-cut cleaning solutions and tell a load of outrageous old wives tales and everyone will admire you for it. You will be able to get drunk on hideous amounts of Gin and Tonic, indulge in numerous boxes of Christmas chocolates and even wear tights with ladders in them and no one will worry because you will be A Wise Old Women.

Think of the late Queen Mum (RIP) and you'll get the idea; a perfect example of how to be wise and win at The Races.

So there you have it. A women's lot can be rough at times but be brave Readers - just be grateful you are not a man who has to shave every day or look like ZZTop! 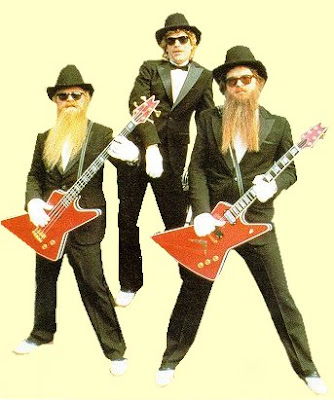 See you all soon,

Ps - This evening I drank two glasses of wine, burnt the curry and then left the teatowel on the hob, set it on fire and smoked the house out - PMT doesn't get any better than that.