Growing old can be difficult. I often joke about wrinkles, flab and ageing but in truth none of these can compare to losing the ones we love. Learning to live without their touch, the sound of their voice or the smile upon their face can be extraordinarily difficult and heartbreaking.

My family and I have had our fair share of grief this year. As those of you who have been reading this blog from the beginning will know my mother in law, Audrey, died just after Christmas, then there was the tragic and shocking death of former sister in law, my mother’s sudden death earlier this month and now on Friday morning last week my father in law, Raymond.

For the last few months Ray had been living round the corner from us with my sister in law. I like to think that the remaining weeks in the bosom of his family were happy ones. He was able to see his children and grandsons more in those last few months than he had in the last few years and even though at 89 the Alzheimers he was suffering from frequently meant that he confused just who everyone was I believe his family still brought joy to his life. In a bizarre way, I think the Alzheimers shielded him from experiencing the real effect of losing Audrey. But I’m sure that deep in his subconscious those feelings and memories lay buried and when I visited him in those last few times in hospital I felt he was reconciled; his time had come to be reunited with the one he had loved for over 60 years. 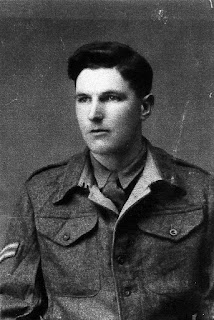 Above is a picture of Ray as a soldier taken in 1945. He served in the notorious 8th Army in the artillery between 1939 and 1946 as a bombardier. Already a qualified maths teacher he was frequently pulled behind lines to work out the trajectory for bombardments. He was evacuated from France and later served in North Africa and Italy, most famously at Monte Casino and Salerno. He was also one of the soldiers who later became infamous for taking a few pot shots at The Sphinx!

Ray didn’t talk much about the horrors of war; I suppose the scars ran very deep. He would talk though of the places he visited, the food he ate, even his weapons and equipment but little of the violence and death. But the few stories of loss he did tell were poignant and tragic and a reminder to me how we should make every effort to avoid war and conflict.

Above all, Ray was a family man. He was kind, gentle and liked nothing more than to tend his wonderful garden. In his old age he and Audrey liked to sip tea, eat biscuits and look over it from their porch and I think that’s the way I’ll always remember them. 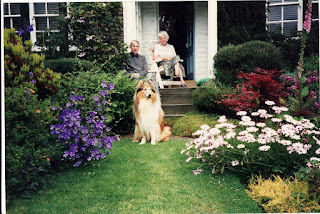 My mother’s burial last Wednesday was heart rendering as all last goodbyes are but I was able to take comfort in the presence of two brothers, my sister, our partners, children, aunts, uncles and Frank and his family all together at my mother’s graveside to wish her peace.

And when the ceremony was over I showed my boys my grandparent’s grave. It felt reassuring to see their headstone; I believe it is important for the boys to learn of their ancestry and most importantly not to be afraid of the inevitable. Although we had gathered for a sad occasion it was lovely thought to know that within a few feet four generations of my family, alive and dead, were united here together. I was aware of the continuation of life, of the blood that runs through our veins, of the genes that make us who we are and the bonds that tie us together in birth and in death.

Two days later, Ray passed away in the same hospital in which I gave birth to Master Benedict. In a way it seemed very fitting. Although Ray has died he leaves behind two sons and three grandchildren who bear his surname and they will be his testimony. In time we will all become one with the earth and the circle of life will continue but whilst we live our memories will always be with us and so will our love for those we have lost.

So it has been a traumatic few weeks and an end of an era for both myself and Mr T. Burying my mother was very hard indeed; I have so many memories of her, my father and my mother’s grandparents. But I also realise that I have been very lucky. Unlike some, I have very happy memories of my childhood and later life and I’ve been extremely fortunate to have had so much love and laughter in my life.

Love is a very special gift. The love we have for parents may differ to the love we have for our spouses, partners or lovers or our children, siblings and friends. But the gift of love is unique; it transcends time, space and matter and that is why I know that although a part of my life has now come to an end and I must look to the future, I will always have my mother’s love.