Love letters, car crashes and tanks. (Beat that for diversity.)

While I was sorting through some of my mother’s photos and memorabilia I was delighted to find two love letters from my father written in the early fifties. They were utterly sweet and charming with little drawings scattered amongst the prose and I will always treasure them as a reminder of my parent’s love for each other.

It did lead me to think, regretfully, that I’ve never actually had a love letter from Mr T.

Although to be fair I’ve had some really lovely thoughtful gifts. If you exclude the Sat Nav system … and the printer…..

However, I’m not complaining as the printer has proved exceptionally useful. In fact I’m now pretty skilled at producing counterfeit twenty pound notes, duplicating letters to harass supermarkets so I get free vouchers for prepackaged meals and scanning copyright piccys of Pierce so I can sell them in the school playground. I’m also planning to use the printer for photocopying my arse for this year’s Christmas cards. That is after I’ve found my way from the kitchen to my study with the Sat Nav….

By the way; I’m offering a prize of a piccy of my photocopied derriere (with suitably placed tinsel) to anyone who can think of an appropriate Christmassy caption….

Anyway, I have actually had some love letters; Mrs T has not been totally barren in the soppy stuff department! Indeed a previous boyfriend once sent me quite a few love letters but regrettably they somehow encountered a small amount of petroleum, a matchstick and a large pile of wood. (Fortunately, my ex boyfriend wasn’t called Guy.)

I bet Guy Richie was a little worried on November 5th though; I hear Madonna can be a little explosive. Well what women wouldn’t be when wearing costumes with thongs that grip your arse like a vice? Guaranteed belly trouble if you ask me.

I am hoping (well praying on my knees whilst wearing a sack cloth and a rosary around my neck) that my old boyfriend burnt my reciprocal letters because I categorically DO NOT want those turning up when I become a multi million pound novelist, reality TV star and the latest Bond heroine. (Career immediately over obviously.) It’s not that the letters were raunchy (I went to a Catholic school; give me some slack please) but you know some things should always remain private. Personally I can’t stand those kiss and tell types who make the front page of our tabloids over here; they should be shot.

And I just like to point out that being an intellectual snob I only read The Times and The Telegraph where such sordid goings on are not reported unless they involve politicians, sheep or a large tub of L’Oreal Vita Face Lift for Men - in which case such reporting is not only newsworthy but essential in the interests of freedom and democracy. (And my celebrity scrapbook.) However, I admit, I do occasionally pick up an edition of The Mail when I need my fix of right wing fascism or for a glance at Thursday's “Femail” section where I can read all about the latest developments in skincare, face lifts and faddish diets. Always useful for a woman of my age.

Okay so I haven’t had any love letters from Mr T but he HAS lovingly passed to me some other letters.

From our car insurers.

Yes, just in case you didn’t pick it up from my previous post I may possibly have had another “incident.” But let me assure you it has ABSOLUTELY NOTHING to do with reversing.

And everything to do with going forwards.

Okay, so I was behind a car at a junction for a busy A road (60mph limit over here) and there was plenty of room for the car in front to pull out. When I say “plenty of room” I mean there was enough room for a convoy of armoured vehicles, a brass band, a procession of baton twirling youths and a blind dog. Anyway the other car started to move forwards so I thought I would go too…

Only the driver in front bottled it, braked suddenly and came to a halt... and as I was busy focusing on the EMPTY road I drove straight into it…..

Yep, it was my fault. Fortunately no one was hurt. Another lesson learnt for Mrs T;

Give up driving and get a taxi.

I had another hair raising driving experience recently. After my mother’s funeral I decided to take a detour to her childhood home to relive the days of my youth and soak in the memories. Now my mother’s family home, was situated on the brow of a hill. To access it you had to drive up a long narrow (only a car’s width) lane which on one side had a steep embankment with I guess a 12/15 foot drop and a row of cottages on the other. The house was situated at the end of the lane with a terrific view across the valley. Here’s a little sketch so you get the idea; 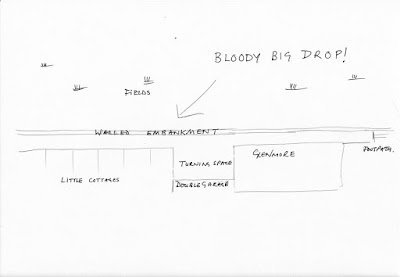 Driving up the lane I was reminded of one of my mother’s favourite little stories from the war. On one occasion an American tank took the wrong turning and mistakenly drove right up to the house. Apparently the GIs then spent hours manoeuvring the tank slowly, inch by inch, into a position where they could get back down the lane again. While the GIs agonised over their precarious position my grandmother supplied them with copious amounts of tea and cakes and as a result was rewarded for her hospitality with a pair of silk stockings!

Anyway, memories aside, I’m driving up the lane and I’m beginning to feel edgy looking down on the valley and thinking that maybe this trip wasn’t such a good idea…but then I remember the tank incident and think that if a tank can do it then so can I……

Only when I reach the end there’s a car parked outside the double garage. The turning space is halved.

My immediate thought was;

Instantaneously I break out in sweat; I am drenched in it. There is hardly any room to manoeuvre at all. And remember, I am the woman who has 3 accidents this year; 2 of them involving reversing! As panic sets in I envisage myself;

a) Hanging of the cliff like that episode in The Italian Job
b) Dead
c) Trying to explain the lack of a car to Mr T.
d) Being burnt at the stake.

Okay, I’m here. So I managed to do it. But not without a lot of expletives, some dubious clutch control and some really, really serious praying.

Oh yes, and a pair of brown trousers.