A last farewell; An eulogy for my mother

Christina was born in London, the eldest of three daughters. Both her parents came from large working class families and were naturally very keen to improve their prospects. Christina’s mother was a furrier by trade and her father, possessing an astute head for business, eventually became a company director. Soon after Christina’s birth her father's career entailed a move near Stroud, in Gloucestershire. Newly accommodated in a large Victorian house, the family was extended with the birth of a sister, and then some years later by yet another.

The grounds of Glenmore, as the family home was known, offered an idyllic setting for a growing family. Christina often talked of her youth with affection and her vast knowledge of shrubs and flowers were the result of days spent playing in the fields and gardens.

Christina also recalled with clarity the events of the Second World War which featured so poignantly in her early childhood. Glenmore, with its numerous attics and cellars, became the home not just for the extended family but for a full quota of evacuees. These were frugal days, where Christina’s mother’s dressmaking skills were put to good use, where the large garden bore fruit and vegetables and offal on toast was considered a delicacy. Nevertheless, despite the hardships the family unit remained strong and undivided and in the post war years, many of the evacuees and relatives would return to Glenmore to relive the days of sunshine in what had otherwise been a dark and terrible world.

Christina and her sisters attended a private Catholic convent school as day pupils. These were the days of straw hats and stockings and strict discipline enforced by nuns. Christina would frequently remark that she was never the best student and sometimes found the atmosphere stifling. Indeed, she was always forgiving if her own children failed the occasional exam and would make a self- deprecating remark such as how much she’d disliked arithmetic and couldn’t add up for toffee.

But the truth was that Christina had a sharp natural intelligence and an intuitive understanding of people. She was artistic with a natural flair for drama. She knew all the old black and white movies and Gregory Peck was a firm favourite. This love of movies became a life-long interest and even in her seventies she was still going to the cinema regularly to watch the latest releases.

Christina continued her education until the age of 18 when she began her training to become a nurse. It was about this time too that she met John, her future husband. John was a newly- trained teacher who had served in the Navy during the latter half of the war and was now living with the monks at a priory and where Christina attended mass and the local youth club. Christina was young, vivacious and beautiful and it was not long before John’s ideas of joining the priesthood flew out the window. A romance blossomed and in the course of time they were married.

After her marriage, Christina settled into life as a wife and mother. Her three eldest children were born in Worcestershire during a period where John worked at a Catholic school for troublesome and disturbed children. It was a remote and sometimes lonely existence so eventually the family relocated to Somerset where John secured headship of a catholic school. A fourth child was born at the family home and so began a period of stability and peace for Christina and John's growing family.

However, raising four children on a solitary teacher’s wage was a difficult task and this is where Christina’s skills as a homemaker and the practicalities of her early childhood held her in good stead. She frequently went without so her children could have as much as could be afforded. Nevertheless they were happy years for all the family; a simple, almost ideal existence where her children learnt the pleasures of quiet reading, ball games and an appreciation of the countryside.

There were times as Christina grew older when she wondered about returning to work or spreading her wings but there was never a genuine opportunity with the responsibilities of her first her children and then her ageing parents. She nursed her mother in her final months and then when her father relocated nearby she visited him almost every day for many years until his death in 1988. John had retired in 1986 and so there followed a few brief years where the two of them enjoyed a happy and contented retirement.

However, when John suffered a stroke, Christina, yet again, became a carer. Despite a partial recovery, John’s health began to deteriorate once more and so began his long and painful death from cancer, which tested the family and Christina, in particular, to the full. After 40 years of marriage John’s death in 1999 left Christina physically and emotionally exhausted and wondering what the future held.

But as those of you who knew Christina well will know, she was never one for self-pity and despite all the odds she resolved to restore her confidence and enjoyment of life. It was a long and difficult task; where others would have given up or slipped into depression she battled, at first on a daily basis, to face the world again. It was a slow, arduous recovery but with determination Christina began to re-establish friendships, sort through the belongings of a lifetime and look to the future once more.

Eventually she was strong enough to sell the family home and move into a lovely flat overlooking the sea. With the help of Isabel, she made new friendships and acquaintances and was full of optimism. Indeed, it was through Isabel that Christina met Frank and a romance began that left both Frank and Christina full of joy and laughter in their later years. Life was fun again and Christina was full of smiles and happiness.

Christina never really made any concessions to getting old. She rested when she needed but for the most part was fit and active. A lifetime of vigorous gardening, running after children and grandchildren had kept her in good shape and at 73 she still had the courage to drive long distances to visit her children or walk tirelessly up and down the hill to her flat. She was a beautiful woman in her youth and retained much of that beauty in old age without too much care. But her beauty ran so much more than skin deep. Her beauty came from within and it was something to be treasured.

Many of us here today when we come to look back upon our lives may describe ourselves as doctors, teachers, electricians, clerks. Christina was, quite simply, a carer. First as a nurse, then mother, daughter, wife, sister and friend. It was her role in life and one she fulfilled to the best of her ability.

In her role as carer Christina witnessed many deaths and she always said with the utmost sincerity that she wished for herself a quick and easy release from this earthly life.

And so on October 15th her wish came true.

For us, her family, her death has come all too soon. Nothing will be the same again. But we are thankful that her suffering was brief and her passing peaceful.

And we know too, that without doubt, she will be welcomed where she belongs, in the Kingdom of Heaven.

On the 29th October we laid my mother to rest in the same grave that nine years earlier we laid my father, a few footsteps away from my mother’s parents.

Together they lie on a hillside overlooking a wooded valley and where, one day, I too will rest my head. 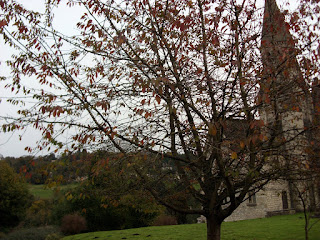 Email ThisBlogThis!Share to TwitterShare to FacebookShare to Pinterest
Labels: A last farewell, eulogy for my mother