Oh poor Mrs T has a cold. It started in my throat and head and then went to my dose. I ate it when it’s in my dose coz den I can’t dalk prowperly…..

Anyway, thought I’d do a quickie post. This is a tag from Master Sy in which I have to tell 6 book related things about me… so here goes….

1.The worst book I’ve read recently is The Love Bug by Zoe Barnes. I bought it at the library clearout for 20p. I had some loose change in my purse and I decided to buy one book from every genre that was in the clearance pile. This was the Chick Lit one and I was attracted to the pink cover like I am to candyfloss but in the same way that I find candyfloss too sweet so was this book. In fact it was like a sweet that one rolls around the mouth and then spits out. Yep, it was soooo bad I couldn’t be bothered to finish it. 20p was way, way too much; it made Thomas the Tank Engine look like a work of sheer utter genius. I was tempted to ceremoniously dump it in the compost heap but I gave it to Mrs B instead… just for verification of my opinion. (She agreed.) 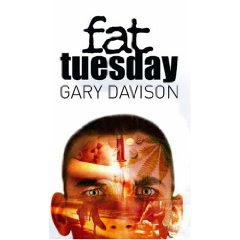 2. The next book I’m going to read is Fat Tuesday by Gary Davison. Gary is a buddy of Paul Burman and Fat Tuesday is his first published book which was released last month. I’m intrigued to read this book because I know Gary likes chocolate in a big BIG way. So I’m just plain old nosey and want to see what he’s writing about. Hopefully, it’ll ooze descriptions of gigantic bars of chocolate taking over the world but if it’s not I’ll settle for a cracking good thriller. Also he lives Up North and I want to see if there’s anyone from The North who knows the full alphabet. Oh dear, did I say that? How terribly politically incorrect. (Hurrah!)


3. The most irritating character in a book I’ve EVER read. Well actually it’s not T

homas The Tank Engine, Postman Pat or even Fireman Sam it is NODDY. Yikes was that kid annoying or what?? And such a selfish, grasping little swine charging toys a whole sixpence to ride in that silly yellow car. I give people FREE lifts in my car if they ask nicely, clean it out, wash and polish it and fill it up with petrol. Not much to ask in return for a trip of a lifetime with a Hot Shot Motor Babe like myself... and I’d just like to say I have not driven into anything lately. At all. Not in the last 72 hours anyway. Although, it’s very possible that my insurance policy might have gone up last week for some strange inexplicable reason…….

Damn, that jet powered engine and the underwater propellers……..

ost annoying book I’ve read in the last year was Simple Genius by David Baldacci. Here’s a quick review. Simple, yes. Genius, no. Okay why should I be so damning? Well Mr Baldacci’s female characters got right up my dose. I like thrillers so I can live with stereo typical portraits of women if the plot is good. BUT here’s a brief description of the first 3 female characters introduced;

a) Michelle Maxwell; tall, good looking, long dark hair, natural athlete, Olympic rowing gold medallist, exercise fanatic, possesses “various” black belts, ex secret service, PI…. In the first chapter she picks a fight with a big black guy; “She could be nearly as dangerous as a bomb wrapped terrorist and was looking for any reason to put her foot through someone’s front teeth…”

Oh I forgot…crippled in a wheel chair…..

Oh I forgot… she has an artificial aluminium leg…..

I’m sensing Mr Baldacci has an obsession with women’s legs (or possibly lack of them).Now I’ve contemplated this novel seriously and I’ve come to the conclusion there’s only one ingredient missing….

5. A book I read to cheer me up when I’m feeling blue is The British Medical Association’s

The Complete Family Health Encyclopaedia. Sounds a little strange I know but when I read this I realize how lucky I am not to be inflicted with some very strange and awful illnesses. I’ve been working my way systematically through the encyclopaedia and this method has always worked for dragging me out of any depression.

Until last night that is when I reached Mental Illnesses…now I’m not feeling quite so good…..

6. My own book which I referred to some time ago; The Turley English Dictionary is making good progress. If you remember this book is unique because I list the standard meaning of a word and then the correct meaning. Some of my earlier definitions can be found HERE. However, for your perusal, here are a few more of my recent definitions to encourage you to buy this masterpiece when it comes on the market;

Standard definition.
A woman who wears a pinny, cooks, cleans and obeys the rules of her Lord and Master.

Correct definition.
A short fat women in her forties who wears a T shirt emblazoned with “Make my day; quit nagging me.” She has no idea about cooking, has not slightest interest in cleaning and steadfastly annoys her husband with fantastical tales of one day becoming a writer. (And celebrity chef.)

Standard Definition.
The offspring of an adult which has not yet reached maturity.

Correct definition;
A small (although sometimes can be annoyingly large) humanoid creature. Cannot look after itself in anyway at all unless in possession of its mother’s purse and at the sweet counter. Both small and large versions usually have odious underpants.

Correct Definition
A four legged mammal which vomits and excretes continuously on carpets and which may soon be mummified.

Correct definition
A French manufactured lethal killing weapon. Unfortunately, the French failed to develop it until after WWII.

Standard definition
A four legged reptilian creature known for its ability to hop.

Correct definition
A Frenchman known for his ability to hop. (Backwards)

Standard definition
A period of a woman’s life where her fertility decreases.

Correct definition
A period of a woman’s life where hair loss precedes the onset of madness.

Standard definition
The loss of sane and rational thinking.