Pride Comes Before A Fall

Oh that’s a bit of a cliché title. But it’s quite accurate isn’t it? We’ve all known someone, or maybe it’s even happened to you, where pride or vanity has preceded a disastrous fall from grace or possibly a severe attack of acne. Think Margaret Thatcher ousted from power or Brittany Spears covered in boils.

( No, actually don’t think Brittany Spears covered in boils that gal needs a break and she’s young so she’s entitled to have spots – OK - think Joan Rivers covered in boils instead. Oh yes that’s muccccch better. Mind you it’s possible the boils could be mistaken for some loose beadwork or possibly even her nipples.)

Now Mrs T has no pride. Why, she will happily consume huge bars of chocolate and allow her legs to rival a 500 year oak tree for “Best Trunk of the Year.” She freely admits to the world she is a hopeless cook, poor housekeeper and a sorry excuse for a woman. Mrs T has also had three children which means she has been caught many a time on the loo with her knickers around her ankles and thus reduced to her present humble status of a fraught, disturbed (and underpaid) housewife.

Except for her driving skills of course. When it comes to driving Mrs T is supreme. Yep, I’ve studied “Grand Prix Crashes and How to Survive Them” with due care and attention, I worship at the feet of Jeremy Clarkson and I can cut up a boy racer with no trouble at all. And with my Anti Tank Missile mounted on the roof of my Cmax and machine guns at the ready I’m the Scourge of The Home Counties; an agent of retribution for all those road hogs out there who would do battle with Mrs T for the outside lane and first place in the queue for the Drive Thru. (If you’ve not read My School Run tirade or even my further diatribe The Bitch is Back you’d better do so now.)

By the way did you read my post on Disconnected Consortium entitled Life in the Fast Lane which was all about Driving? No? Shame on you! Because it’s all about Mrs T’s consummate skills as a driver; Mrs T has never had an accident!

Well apart form that one earlier in the year that I mentioned back in The Bitch is Back.
And that wasn’t really my fault, so it’s not a real accident. Neither is the Wing Mirror Incident because as I said before; wing mirrors are just optional extras aren’t they? So they don’t count. Well, not on my book anyway. (It’s a big book.)

Oh, by the way…Did I tell you the loss of the other car’s wing mirror made it to the front page of the local paper? Apparently, someone saw it spinning off and thought it was an alien space craft; they got £50 for the exclusive story. I don’t know who the snitch was though. Who would want to profit from someone else’s misfortune like that? Not me; I’m way too honest.

Anyhow let me explain about the other incident. Poor Mrs T was blocked in by 3 cars in the doctor’s surgery. Silly, silly people who should have known better than to block in a woman who needs to reverse who has a sick child in her car. Of course I still had my lovely Volvo then which didn’t even get a scratch from the resulting collision. Alas, the Vauxhall Vectra, which was parked sideways on behind me, did not look so pretty. It looked… kinda…squashed. In an attractive “Modern Art” sort of way. An expensive piece of Modern Art… if you know what I mean.

Of course, Mrs T, who would never be dishonourable (except in relation to the Gutter Press) went into the doctor’s surgery to declare her rotten, abysmal luck in the most grovelling and snivelling fashion. Unfortunately, it was peak time on a Monday morning which meant it was packed with persons in various shades of green awaiting their overdue appointments. Thus Mrs T was slightly embarrassed at having to announce her wrongdoings to the foul tempered inhabitants of about 20 or more people. Mr Joe Bloggs, the Vauxhall Vectra owner, did not look too pleased either when he realised it was his car Mrs T was talking about in the following fashion…

“Um… there’s a very interesting piece of Modern Art in the car park. The paintwork is particularly unique; a fine blend of green and white with a dash of bumper. The registration number is….”

Mr Bloggs was not amused. There was nothing for Mrs T to do but flirt and flash her eyelashes in order to soothe Mr Bloggs’ nerves. Instantly Mrs T was transformed from a sharp, sophisticated, highly intelligent female with superb driving skills who has made a slight error of judgement caused by some selfish morons’ stupid parking into a silly, dizzy woman with no brains (although surprisingly a brunette) who required the sympathy and understanding of a true gentlemen. (Mrs T hastens to add she didn’t overplay the flirting too much as it was only a Vauxhall Vectra and not a Bugatti Veyron in which case she might have been tempted to accidentally drop her spare knickers from her handbag – the G sting ones she uses for flossing not the comfort Mr T fool-proof ones.)

Anyway, Mr Bloggs soon came round to Mrs T’s way of thinking and even thanked her for owning up to her heinous crime! So you see it wasn’t in fact a proper accident. It was just a little “misunderstanding” between two cars; Mrs T’s driving skills still reign supreme.

Well they would if it wasn’t for the little “misunderstanding” she had on Tuesday.

Umm. Yes…. Mrs T had a little collision with a Nissan Micra… while she was reversing – again.

Now I’d gone to Mrs P’s house which having a little small holding attached is up a dirt track. Of course when I got there I remembered that we had cancelled tennis as Mrs P had a prior arrangement. Now the cleaner was in residence and aware that Mrs P was not in had not parked so diligently as normal leaving Mrs T with the choice of two equally unpleasant manoeuvres requiring her to reverse. Mrs T took what she thought was the easier version, as she has done before, and reversed back down the drive on to the dirt track. It requires some concentration as it is a long drive and one must obviously not impale one’s car on the gateposts.

Alas Mrs T was so busy watching the gate posts she did not see the little Nissan Micra which had mysteriously parked sideways across the bottom of Mrs P’s drive. Mrs T did hear the sound of crumpling metal though. This was shortly accompanied by some mild vocal obscenities. (When I say mild, I mean mild as in the context of softly spoken; the language was pure filth. Well, possibly…. Ssh….don’t tell anyone I know such words… especially Mr T who only just got used to me saying “Oh bother!” when I pull the carbonized Yorkshire puddings out of the oven.)

Now I don’t want to offend any of my readers who might own a Nissan Micra; I’m sure they are highly economical and do a great job…. But when did they add to them to The Matchbox Collection?? I mean it was soooo small how the hell was I suppose to see it there? I mean if you going to park up a dirt track in the middle of the countryside you could at least be considerate enough to use a Landrover. I’m mean I don’t need glasses for driving but I’m really regretting not attaching those x50 magnifying specs Mr T uses for examining our bank account.

Anyway here’s a picture of a Nissan Micra…. 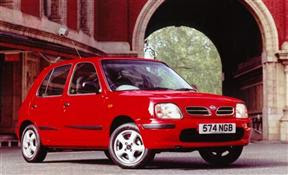 Yep, it wasn’t looking good and that’s why I won’t be driving a Nissan Micra.

Life’s a bugger sometimes isn’t it? We’d all like to be driving around in a some impregnable car but the law of economics says that’s just not possible. But maybe we should all be a lot more careful when driving.

And that includes Mrs T.

Anyway must dash as Mr T has just let me out of the cupboard.

Ps. Yep, I’ve no pride left at all now. None. Nope, none whatsoever.

Pps Did I tell you that I’m one hot sexy vixen between the sheets? There ain’t a woman to compare……

Ppps; Coming soon; Bond is Back in… The Man with The L’Oreal face Cream