My Top Ten Worst Companies for Customer Service in the UK

No 1. Coming in with unrivalled incompetence at No 1, the pole position for continuous spectacular incompetence over a decade of bad customer service, during which I have been reduced to tears and almost suffered a fatal coronary through stress is... British Telecom. This is the company that purports to be a communication provider but has as much idea what the word "communication" means as your average slug. In fact, a slug would probably arrive at its destination quicker then the average BT customer service assistant can understand the phrase "It is not working."

No 2. Sports retailer Sports Direct. The major difference between British Telecom and Sports Direct is that Sports Direct don't actually engage in any communication at all. They don't have a customer service telephone line, they don't answer emails and basically don't do anything at all. Unless you have paid for your purchase through a third party like Paypal there's more chance of the earth being hit by an asteroid than actually getting your money back or - in my case even getting the right product delivered.

No 3. British Telecom. Again. You know, I heard recently that the government are planning to install free BT phone lines in UK immigration holding centres. This is a cunning plan because the effect of experiencing BT incompetence will result in either the mass suicide of the illegal immigrants or they will return home as fast as possible - thereby solving the immigration crisis in one fell swoop.

No 4. This firm has a way of getting under your skin and is renowned for passing customers from one department to another and from service agent to another. During the course of one on-going complaint I once spoke to about twenty-five different people. This firm is.... British Telecom.

No 6. You might have thought it was an urban myth that when you have a technical problem with your pc/phone/tablet, a customer service agent will tell you to turn it off and then back on again.This myth is not a myth it is actually true. Operating in a similar vein British Telecom's The Hand of God Concept this company believes flicking your switches on and off will also miraculously solve your problem. The company is, unsurprisingly, also British Telecom.

No 7. Microsoft. For having the most elongated procedure to change your password or security information ever. Forgetting your password is considered a crime at Microsoft and you will be made to suffer. Numerous forms, special codes, emails and phone calls later and I am still waiting to update Master Ben's Microsoft account. I now have to wait over a month before they will implement the change of email. It would be easier, and quicker, if Microsoft just sent you a whip and you could self-flagellate yourself as punishment. On the plus side, I should say that Microsoft customer service agents are very patient indeed and have an excellent bedside manner - there was only the tiniest hint of annoyance after my last approx 40 mins conversation with one of their reps - and I should point out that the reason our investigations were taking so long was due to slow broadband - which is the fault of British Telecom.

No 8 The makers of  Fifa 14, E A. To be fair to E A, I haven't actually complained to them yet. I have spent the last ten days trying to update Master Ben's Microsoft account and solve our broadband problem so that Master Ben can actually play Fifa 14. Sadly, now that we can access Master Ben's Xbox account the EA servers seem to be continuously down. Having researched this on the net, it seems this is an ongoing random problem. I am not sure if I can actually face complaining to E A. At this moment in time, I would rather take a gun to my head.

No 9. For being the only company where I have had to explain what an extension lead is to their customer service agent.

"Yes, an extension lead. You know, it's a lead you can connect from your socket to your appliance so you can use your appliance in a different place. In my case, it's connected from the hub, runs up through the ceiling where I can connect it to my laptop, if necessary."

Yes, the no 9 position is British Telecom.

No 10 It probably goes without saying that British Telecom takes no 10 position. In fact, I actually feel a bit mean-spirited including Sports Direct, Microsoft, Comet and EA in the same air space at British Telecom who could actually take all ten chart positions with ease. I have a good friend who works for British Telecom (fortunately not in customer service.) I feel deeply sorry for her as she's probably going to burn in the fires of hell just for being associated with BT.  What bad luck.

Anyway, just in case you missed my artistic tribute to BT I created on one of my previous British Telecom rants, here it is again. I like it. It's kinda therapeutic. 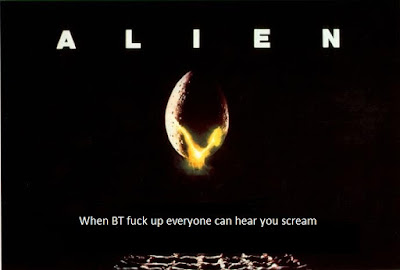