Okay before I get really started on this post about Bono (no, not the dog biscuits but the singer with U2 ) let's refresh our memories about the man behind the dark glasses. 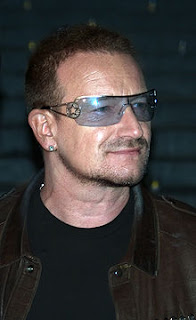 Yep, there he is...wearing the obligatory dark glasses. So what do we know about the lovely Bono?

He's a very successful singer and lyricist with mega rockband U2. (Okay -let's not argue about the lyrics - we're amongst friends.)

He wears tight black leather pants. Even in hot weather. (Fortunately, I don't have to stand next to him.)

He has a reputation as a humanitarian and a philanthropist. Some might say it's narcissistic philanthropy but I say....anything that helps the world is goooooood. (Breath in...exhale Mrs T...Breathe in...exhale.....)

You know, I imagine Bono is the kinda guy who sleeps on black satin sheets...made in Peru.

I like U2 though. Honest, I do. Especially their earlier music. I'm just jealous Bono can still get into the same pants he wore twenty years ago. Although maybe that explains why dogs are always sniffing him? Can't just be the name can it? Anyway, here's one of my favourite tracks from U2's heyday taken from the album War. And since we've just welcomed in the New Year it's the appropriately named New Year's Day.

Well, now we've remembered just who Bono is, we can start on my story...

Over Christmas The Turleys took a trip over to see Mr T's older brother who moves in salubrious circles. As we chatted one night, Mr T The Older related a true story to me that had happened to one of his business partners. I'm going to have to paraphrase a bit (A not uncommon happening here on my blog) but I think you'll get the idea...

Well one day Mr T The Older's business partner was dining with his lady friend in an exclusive restaurant in Ireland. They are just coming to the end of their meal when the maitre d' approaches them looking anxious;

"Excuse me Mr Anon, I wonder if you would be so kind and assist us with a little favour? One of our most appreciative customers is coming in and we know he would like to sit, at this, his regular table. We were wondering, as you are approaching the end of your meal, whether you would be so kind as to take your coffees and liqueurs at the bar? We would be most happy for you to have your drinks on the house as a gesture of goodwill ......"

Now Mr Anon and his lady friend are hospitable folks. They are not in the least put out and subsequently agree to move over to the bar. As they are happily chatting away who should arrive to take their vacated seats but none other than the great man himself, Bono, accompanied by an unknown guest.

Well Mr Anon's lady friend is all of a quiver. Superstar and A List Celebrity Bono is now ensconced upon the very seat which she'd just been keeping warm with her botty! In fact, she is sooo excited that when Bono disappears for a minute Mr Anon asks the maitre d' if he might subtlety ask Bono's guest to persuade Bono to autograph a menu for her at an appropriate juncture - so as not to infringe upon Bono's privacy or seem unduly pushy.

How very nicely done Mr Anon - an excellent attempt to disguise simpering idolatry with some discreet but civilized begging! Now that's the style of a true business negotiator!

So anyway, in the course of time, the maitre d' brings over a menu which the charitable Mr Bono has duly signed. The couple are delighted and as they get up to leave Mr Anon tells the maitre d' he is more than happy to pay for their own drinks. At which point the maitre d' replies;

"No need for that Mr Anon; Mr Springsteen has picked up the tab for you."

Yep, the mystery guest, dining with Bono, was none other than Mr Bruce Springsteen! I guess he liked the anonymity of being Ireland!

And Mr Anon and his lady friend failed to recognise him! I bet they felt like a right pair of chumps!! Ha, ha, ha !!!

Gez, that makes me feel good knowing there are other people out their who wouldn't recognise an A Lister. Mind you, I wouldn't even recognise Ashton Kutcher.....even though I sit on his cushions every day. (If you don't understand that please read previous post.)

Ah well.... seems only fair I should end this post with a bit of Brucy and Bono together. Here they are singing the U2 track I still haven't found what I'm looking for

Great Stuff! I feel like rockin' and rollin'! Right where's my dark glasses and PVC pants??

Ps. I feel it's time time to give poor Tommy Cruise a break. If you can guess who my next victim is you can win a lunch date with Mrs T. ( It will be my delicious home cooking obviously.) I'll give you a clue though cos it's a difficult question....This man has a really, really silly name that is almost unpronounceable - unless you work in John Lewis's haberdashery department.

Pps. I hear Bono dog biscuits are quite nice spread with jam. Yummy.

Pps. I hope Mr Anon doesn't read this blog. If he does, blame Mr T the Older who said it was okay to say you were a chump. Okay, he didn't say the chump bit. I did. Hey, I just like the word!

Email ThisBlogThis!Share to TwitterShare to FacebookShare to Pinterest
Labels: Bono, Bruce Springsteen, The Boss, The Wicked Ways of Mrs T