Well it's been a long hard winter over here in the UK. Snow fell on the night of the 18th December and since then temperatures have barely risen above freezing. Due to compacted ice, fresh falls of snow and lack of grit, the roads are becoming increasingly treacherous. My boys have lost numerous days of education and what, at first, seemed thrilling is rapidly becoming tedious in the extreme.

Fortunately, it looks like the weather is set to improve this weekend. Whilst today is traditionally the coldest day of the year in the UK, we are more accustomed to snow in February or even early March. Indeed, my father often recounted how, on a night in March, he drove through snow on a tractor to fetch the midwife to attend my birth. So what lies ahead in the months to come is, as ever, uncertain.

Our weather has always been somewhat unpredictable in the UK. Although never particularly extreme, it explains why, as a nation, we never stop talking about it. Will we be able to take our cucumber sandwiches and tea on the patio or must we adjourn next to the coal fire? It's a matter of the utmost concern for all and can generate conversation for hours and hours!

And as well as talking about the weather for yonks, if you're unlucky enough like Mrs T to have a family of back seat drivers, we'll also bore you to death with talk about motorways, route planning and how long it takes to get from A to B! And if you get bad weather and a long journey together it's sheer utter torture - like one of those dreams where you fall off a cliff and you just keep falling and falling into a dark oblivion......

Thank goodness for Sat Navs - the best invention since chocolate!

Yep, now when I hear my sister in law mention the word "journey" I just put my ears muffs on, pour out the brandy and imagine her being beheaded.

I know, I know, I'm cruel - but hey my life's too short to die listening to a discussion about the time it takes to get from Penzance to Glasgow....via Birmingham....when the hard shoulder is closed and there's roadworks on the M1....

Anyway, unfortunately, my sis-in-law has just returned from being stuck in snow in a hell hole of a place (France) so no doubt I will shortly have to prepare myself for the usual description of gruesome journeys across the continent.

Mind you, that's not as bad as the entire evening I had to endure once of her and her ex hubby's trip to Canada - which could have been interesting except they spent about 3 hours debating whether or not a small black blur on one of the slides was a bear. I'm not saying I was bored but after 3 hours straining to keep a "absolutely riveted and oh so jealous" look on my face I started talking to the potted plants.

Anyway - I expect you are all curious about my car!

Well the news is that my infamous Cmax, which might have had a few "incidents" (about which I deny all knowledge) has performed admirably well in the hazardous conditions. It's got stuck a few times, slithered and slipped around but with the odd push, some high revs and some sweet polite nurturing (ho hum) it has been absolutely spiffing! Why I didn't even get cross with it today when it careered right across the road, hit a central reservation and got a little denty -wenty on the undercarriage! Indeed, I commended it for managing to make a matching pair; that little denty wenty sits so well with the other denty wenty on the other side from when I had my puncture........

Now here's a piccy of my car. Do you notice anything special?! 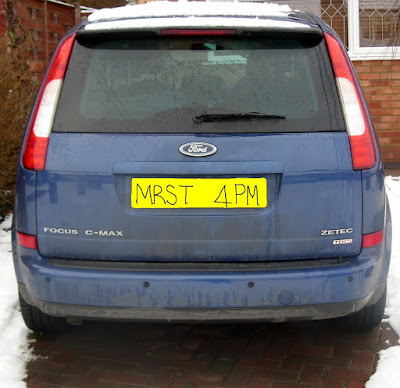 You can't see any dents??

True.... but this piccy is only taken from the rear. It doesn't look quite so good from other angles.

Yes, yes. Stop being pedantic on me!

Look harder! What are those little black spots on the rear bumper??

Why..... they're my new reversing sensors!! And guess what folks - I haven't reversed into anything lately! Hoorah! Rounds of applause and general merriment!!

Now finally... I guess you're wondering how wealthy I am with my own personalized number plate eh? Well, as you know, I'm not normally such an exhibitionist but just in case you haven't been following our news.....

This year we Brits are going back to the polls - it's a general election year - and I've started my campaign early!