It's about time I gave you all an update on my pussy.

Well my pussy likes sausages. In fact sausages are a real favourite. A bit of beef doesn't go amiss either. Yes, my New Pussy likes just about everything; pork, chicken, left over spaghetti bolognese, mouldy lasagne that's been hiding out in the fridge for a month but he especially likes Miss Cleo's chicken.

I guess Pussy is making up for being famished for a few months but since he's settled in he's started stalking my elderly pussy, Miss Cleo. Well stalking Miss Cleo's food anyway. For the first week or so he was happy to lie spreadeagled, replete on Whiskas, on the downstairs sofa but then he discovered that Miss Cleo has tasty little chicken treats in my study. Well....actually.... she has entire meals of chicken.

Yes, I know that sounds overly generous for a cat - but how the hell was I to know I would inherit the world's only cat with colitis?

It's just not fair! Not only have I been wiping small boy's botties for years but I have a cat with no bowel control. Once, when it was really bad out of desperation I put a Pampers nappy on her but unfortunately one of the neighbours reported me for cruelty. Personally, I thought I was being kind - isn't it bad enough cleaning your derriere on a daily basis without having to get your paws muddy in the back garden or soiling your owners shag pile? Besides, I think Miss Cleo looked kinda cute in her nappy. Although it was probably the bonnet that gave her the real street cred. 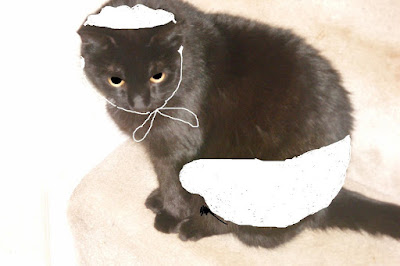 Yep, anyway I discovered a while back that the key to avoiding an "Emergency Carpet Situation" was a diet of chicken. The trouble is my new pussy now thinks he should be getting chicken for every meal too. No can do; I've already had to give up milk chocolate and switch to cooking chocolate to afford Miss Cleo's rations -if New Pussy has chicken at every meal I'll have to resort to sniffing coco powder for my choccy fix.

Well apart from stalking Miss Cleo and that little "accident" involving a yellow-like fluid on the carpet in my study, New Pussy has been settling in well.

Apart from the flatulence problem.

Yes, New Pussy omits what can only be called "stinkers." Previously my study had aromas which hinted of hidden chocolate bars and candy floss but now it pongs like a sewerage station. Worse, it's not as if I can prepare myself for the onslaught by sticking a peg on my nose cos New Pussy is a silent, stealthy stinker! Yep, one minute I'm happily typing away and the next minute I'm writhing on the floor, hands round my throat and gasping for air. Boy, is he a deadly weapon! In fact only yesterday I found a giant mouse outside the back door which didn't even looked mauled... I reckon New Pussy just broke wind and gassed it to death.

Well anyway the purpose of this post is to announce the winner of my Name My Pussy Competition. There were some strong contenders in the field; Macavity from Mrs A appealed to my innate snobbery as it's a highbrow literature name with provenance, Squibbles from Mr Intrepid was popular with Master Ben and me for being just plain silly (and it was the name that New Pussy responded best to,) Tux from Hillgrandmum was short, sweet and New Pussy kinda looks like he's wearing a tux, Buffy from Master Sy just cos it sounded good and Ewe No (I do!) sneaked in at the last minute with Ballicker. (Had to look it up EweNo - but it was well worth it!)

Yes, yes I know it's nepotism but I award the prize of a life size pin up of Damien Lewis to me!

Well I sort of started calling him Bond and it sort of stuck. But I'm a nick-name type of girl so I had to change it just a little..... Sorry folks!!

Anyway, what can I say? Bondie loves me already and I love Bondie.

Email ThisBlogThis!Share to TwitterShare to FacebookShare to Pinterest
Labels: My new pussy cat