Music Monday; Me and My Banjo!

Impressed hey? Didn't know I was so talented eh?

Oh alright I'm lying. I don't play the banjo although I can make a good sound with a pair of wooden spoons and some empty baked baked tins! I also tried using my cheese grater as a washboard but somehow it didn't quite work. Don't ask me why, but the paramedic said I should have been using Cheddar. I replied "Don't you know we are part of of the EC you can't say Cheddar you must say "Fromage du Anglais a la place avec le grand gorge and caves which emits a cheesy smell."

I demand a recount!

Oh no, we can't can we? Cos not only have Blair and Brown renegaded on their election manifesto to vote on Europe now David Cameron has too. Huh. Well at least he got it out of the way before the next general election so we all know where we stand. Still good news for the UKIP and NF I suppose.

Hmm....I was supposed to be talking about banjos! Well I don't play the banjo but I know someone who does. Here's one of my favourite funny guys, Steve Martin, doing something entirely different. I've just ordered his album The Crow, a self penned banjo blues album. Sounds interesting! Let's take a look at Steve playing the title track on the David Letterman show back in 2007.

Oh boy. Steve is just so talented! I can't wait to start foot tapping around my house! 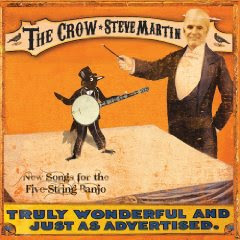 NB; I've been a bit quiet of late but I've got lots coming up soon including an interview with that spurious author, Gary Davison, who often appears in my comments section, the winner of my Name My Pussy Competition and an update on my car. Yes, that is the notorious CMAX with the Collision Syndrome problem.... So stay tuned!
at November 09, 2009

Email ThisBlogThis!Share to TwitterShare to FacebookShare to Pinterest
Labels: EC stupidity, No referendum on Europe as promised, Steve Martin The Crow