Vacuum Cleaners, Fleas and Men's Habits That Make Me Mad.

I was over at Paul Burman's site the other day gloating about the sudden death of a number of Paul's electrical appliances which had caused him a lot of anxiety. Alas, I should have known better - especially after my posting my blog Pride Comes Before A Fall. Yep, you've guessed it - as soon as I turned on my vacuum cleaner the blasted thing started making weird noises and emitting sulphurous odours. Yep, it kicked the bucket - good and proper!

I can't complain though about my old DCO2 (limited edition) Dyson vacuum cleaner - 12 years of sterling service. Dysons are so powerful they can even suck up up fleas! Don't ask me how I know that - I just do.  Of course, I've never had fleas in my house but I had a friend who did and she swore that a Dyson was better for rapid flea removal than any lethal potion. In fact, my friend was so good at  flea extermination she auditioned for the part of Ripley in Aliens. She didn't get the part though - some two bit actress by the name of Sigourney Weaver who had a DCO3 and a large water pistol got the job instead. Huh. Hard to imagine Sigourney Weaver saying Get away from her, you bitch better than me my friend who is exceptionally eloquent. Hmm... life can be a bitch a times....

Anyway, after the demise of my Dyson I mulled over the potential replacements. Being a philosophical soul, as you know, I came up with a few serious questions about electrical appliances in general;

1. Why do manufacturers always give products silly identification numbers? Now a DCO2 is relatively simple - but boy, some of those washing machines and DVD players' serial numbers are mind blowing! For example; I regularly see identification codes like DW121WCS28, DWE19121WD28 and WD122CWS27.  Now I don't want to state the obvious but all these long codes don't make it easy to recognise products when you're trawling though the catalogues. And have you noticed how these identification numbers always have a combination of the same letters and numbers and just when you think you found your DW121WCS28 at a bargain basement price on the net you realise it's another model because one stupid digit is wrong? Yep, this identification number process really screws me up. Why can't they simply call them  A, B, C, D, E, F ..... and so on. I mean how many models does a brand have? Come on, get real manufacturers; I don't want a degree in quantum physics just to work out your identification codes!

2. Okay, if it's not codes it names. And no, manufacturers don't have simple names like Basic, Standard and Luxury. They have names like; Featherlight Deluxe Senorita, Classic Gold Senor or Platinum Supreme Madame.

Now I don't want to sound facetious but really I couldn't give a monkey's arse about these names! And I'm intelligent enough (no spurious comments please) not to fall for the marketing ploy that wants me to believe that if I buy the Featherlight Deluxe Senorita vacuum cleaner I will suddenly become a light footed flamingo dancer swirling around my lounge with a sexy looking piece of suction equipment. Look, I know I'm bonkers but even I don't imagine myself making out with my vacuum cleaner! And well, whilst I know sometimes some more adventurous gentlemen are partial to vacuum cleaners I have absolutely no intention of sucking up to my breasts - not only do I not want breast reduction but neither do I want a conical shaped bra like Madonna.

3. Why do men always name their pieces of electrical equipment or cars? Are they bonkers?? For example Mr T calls his car "Bess." Excellent - you cannot imagine how many times I've heard how "Bess" has got Mr T through typhoons, hail storms and appalling blizzard conditions. Yeah, but what I want to know is can Bess make a beef hotpot, wash Mr T's shirts or clean the toilet?

And it's not just cars is it Ladies? Nope, every piece of machinery has a name! For example, take the tradition amongst pilots and soldiers to name their aircraft and tanks. Madness, complete madness.  Not only does the darn thing have a silly identification code like M4A1(76)W ( that's a genuine Sherman tank) but then they go and call it something daft like Matilda or Marilyn. Yep, I just love the idea of calling lethal weapons something so soft and fragrant as a woman....

Aw schucks, whata day I had! I took out two Panzer V Tiger IIs  and I was just about to go in for the kill on  a Panzer V Panther when a Limey in a MKII Matilda II pulled up alongside and nailed it in the turret! By that time the worst was over, so I climbed out and I was yelling at the Limey when we both noticed that the Krauts had called their Panzer "Helga." Man, we creased up! I ain't never laughed so much - so I went back and patted dear old Mabel. Why you'd never get me call my old girl anything as stupid as "Helga"......

Anyway, I know you're all interested to know what I'd call call my car, vacuum cleaner and a few other appliances if I named them. So here we go;

Oh and on a final note, here's a piccy of my late DCO2 limited edition sucker; 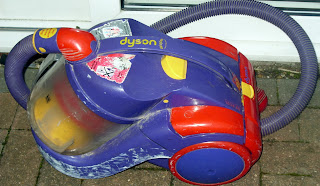 Umm.. I think you can tell from the colours why it was a limited edition!

And here's it's replacement; a Dyson DC19 Precision Bagless Cylinder; It looks a bit space age doesn't it? Hey, that's okay - next time there's a dressing up day at school I'm going to strap it to Master Ben's back and send him as Buzz Aldrin.
at May 09, 2010