Yes, I know - shocking! Who would have thought the mild-mannered Mrs T would write about sex?

Anyhow, I really wrote Fantasia as an educational story for children as a way of discussing climate change and the social responsibility we all have to each other and to our environment. (Alongside the fact that I'm just a big kid and like writing silly stuff.)

Well, at long last, I've finally got around to publishing Fantasia as a separate entity so it can reach its intended audience. Currently, it's just as an eBook on Amazon but long-term I'd like to make it into an illustrated book if there's enough interest. I also have plans for two more children's books. One is a story that I made up to entertain my eldest son in the car when he was feeling travel sick and the other is a recent story that came to mind when I wrote about Johnny Potato VC during the April A to Z blog challenge. Both these books will also have to be long-term projects because illustrated books cost a serious amount of money to produce.

Now Fantasia is finished, my next project will be The Very Best of The Witty Ways of a Wayward Wife where you will be able to read the best (or worst) of this blog in book format edited and proof read. Yep - you'll finally be able to read one of my blog posts without the obligatory typos. I originally intended to publish The Very Best of  The Witty Ways Wayward Wife late last year, but I had a rather nasty health scare which, fortunately, turned out to non-life threatening but meant that I shelved the project and have been somewhat preoccupied with my health this year. It's time though to get back to writing and editing. Life is short and I still have a lot more to do!

So I leave you with Fantasia. It's on Amazon for 99p/99c or free if you're a member of  Kindle Unlimited. However, if any of you would like a copy for your kindle to inflict on your children, grandchildren or on yourselves please email me at jane@sweetandsaltybooks.net and I'll send you one. In return, a few words, good or bad, would be welcome on Amazon. 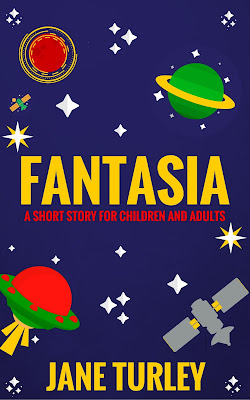 The year is 2031 and Walt Disney, suspended in cryogenic suspension since 1966, has been brought back to life by Dr Corey, a scientist researching brain function for the purpose of suspending life for space travel. But Dr Corey gets more than he bargained for when Walt awakens. Opinionated, arrogant and still in love with films, Walt is overawed when he discovers what has happened to the world in the intervening years: films are a whole-body experience, all human organs except the brain are replaceable and research is underway to preserve life so mankind can reach the outer edges of the universe.


But what affects Walt most is the shocking news that the world is being affected by catastrophic climate change...
at October 12, 2015