A Fashion Rant and My Design for Rick Owen

Yes, it's time for my annual fashion rant. Hoist up the bridges, affix your armour and be prepared to do battle with a host of Mrs T's anti-fashion hyperbole and rhetoric.

Now, as usual, I manage to keep calm about the catwalk most of the time (even though most of the designers are clearly bonkers) until I see an outfit that is truly horrendous and my fashion steam gauge goes ballistic.

This happened a few days ago when I saw these pictures from designer Rick Owen's exhibition at the Paris fashion show. If you feel you can suffer the video footage the YouTube clip is below.

Now I've looked at this video several times. Apparently, the concept of female models carrying other female models is meant to be meaningful and saying something sincere about The Sisterhood. ( etc etc.)

Give me a break! I can read about that sort of feminist claptrap in The Guardian. But at least when I'm reading their diatribes I'm not vomiting over my keyboard.

Now it's not that I have anything against the idea of  The Sisterhood - I mean us girls having been watching each other's backs for years and many of us have been forced to wear sacks and babies on our backs since the beginning of civilization. So what we don't need is some overpaid, pretentious male fashion designer thinking he's saying something new and profound about The Sisterhood whilst his models have the indignity of having each other's backsides in their faces. Because, Mr Owens, us women already know what being a woman is all about and the difficulties we've faced and continue to face all over the world.

God, I am enjoying this rhetoric. I should have been a speech writer. If anyone out there needs one, I'm available for hire. Furthermore, you can get me for a reduced rate if you supply me with a selection of this season's designs from Marks and Spencers.

Now, I don't want you folks to think I haven't considered these designs seriously. I have. I also considered them alongside Rick Owens earlier fashion show which had men wearing designs with peepholes in them so you could see their assets.

Glorious. Just the sort of outfits I want to see when I'm picking up my kids from school or a loaf from the bakery.

Now we've all heard the argument that designs like these are just trend setters and when they translate into high street fashions they're more conservative.

So, in other words - the "women carrying other women" concept will become a very small backpack. Made of hessian. However, in Top Shop it will have sparkly bits stuck on it and a machine-stitched patch that says "Love Me, Love My Bag."

Joy. I so need one of those. I must ask Mr T to get me one for Christmas.

And the men's peephole garments will turn into...um.... um...ordinary trousers. Because anything else with a hole in it below the waist will result in being charged for public indecency.

So basically, the original designs don't translate into anything remotely similar and all this silly stuff on the catwalk is just exhibitionist, pretentious, arty-farty, egotistical fashion gibberish.

Anyhow, because it's a Saturday night and I'm in an artistic mood (and have nothing better to do) I've designed my own outfit especially for Rick Owens using his "peephole" concept. Imaginatively, I've called it "Man Wearing Romper Suit.". I am showing the "below-the-waist" rear view. Hopefully, Rick will wear it at his next show. 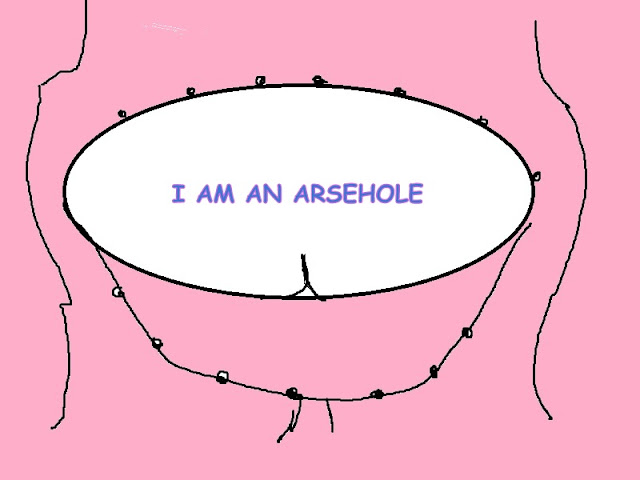