Stairways to Heaven: The Lovely Bones meets The Shack

Have you ever wondered how you will die? I suspect the most satisfactory outcome for most of us would be to slip away peacefully in our sleep after a long and fruitful life. However, in my experience, that is unlikely to be the case. In fact, when I look back at the lives of people I’ve loved and lost death has either been a long and painful process or sudden and dramatic. Either way, there was no easy way to come to terms with their loss. It was only the passing of time, the knowledge that natural death comes to us all and my belief in another existence that helped to ease my sorrow.

What happens if your child is murdered?

Imagine all the feelings of loss you’ve ever had, multiply them tenfold, a thousandfold even, and maybe you’d still only be halfway to experiencing the horror of being the parent of a murder victim. Fortunately, child murder is something only very few of us will experience but I’m sure most of us can empathize and understand how it might call into question fundamental beliefs.

So as a parent with a religious upbringing it was with trepidation that I approached two hugely popular books which featured themes of child abduction and murder and visions of heaven; The Lovely Bones by Alice Sebold and The Shack by W.M Paul Young. 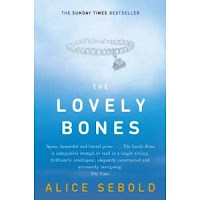 "As he kissed his wet lips down my face and neck and then began to shove his hands up my shirt, I wept. I began to leave my body; I began to inhabit the air and the silence."

The Lovely Bones is the story of 14-year-old Susie Salmon who is raped, murdered and dismembered by her neighbour, Mr Harvey, a loner who builds dollhouses. On her death, Susie is transported to heaven where she observes the destruction and unhappiness wrecked upon her family and friends in the wake of their grief and their struggle to rebuild their lives. In The Shack, the story is narrated by Willy who recounts the story of Mack whose youngest daughter, Missy, is snatched and murdered by the notorious “Ladybird” killer. Unlike The Lovely Bones, which attempts to portray the effect of loss on numerous people, The Shack is primarily about Mack and how he confronts the annihilation of his beliefs and his subsequent reconciliation when God requests his return to the shack, the scene of Missy’s brutal murder.

"I am good, and I desire what is best for you. You cannot find that through guilt, condemnation or coercion, only through a relationship of love. And I do love you."


In The Lovely Bones and The Shack Alice Sebold and W.M Paul Young present, in parts, fascinating glimpses into the human psyche. The strengths of both novels lie in the areas where the authors have truly reflected upon their own experiences and beliefs. To this extent, I felt the earlier chapters of The Lovely Bones in which Sebold deals with the murder and the immediate aftermath of Susie’s death were the most successful. Sebold’s own experience as an 18-year-old rape victim, narrowly escaping death, has clearly impacted on the story which is heartfelt and poignant. However, in the latter half of the book, the timescales change, the plot begins to weaken, the events become more fanciful and it is evident that Sebold’s vision of heaven is really only a device used to explore what is happening back on the earth.

In contrast, in The Shack, the murder and the prelude to Mack’s meeting with God have none of Sebold’s finesse and seem almost perfunctory. The language is prosaic and at times grates on the nerves whereas Sebold produces exquisite turns of phrase which draw the reader in. But whereas Sebold uses heaven to explore earth, Young uses earth to explore heaven and as such, I didn’t feel emotionally involved with the characters until Mack finally confronts God in the shack. At this point, the story takes on a new and vibrant form. Young’s beliefs begin to shine through and his joy in heaven and God is uplifting and addictive. Like Sebold, Young’s early experiences have shaped his writing and his life; he was raised by missionary parents and until the age of 6 lived amongst a primitive tribe who assaulted him and practised cannibalism. He freely admits that those early days provided a sense of identity which grew alongside his more Christian upbringing. However, his identity and beliefs were all called into question when family tragedies and personal failings led him to a place of despair, a place he called The Shack. This period of his life, which he attempts to mirror using Missy’s death as a catalyst, is what led to the resurgence of his beliefs and his acceptance of God.

I am always intrigued by other people’s concept of heaven and, like many, I have my own, albeit incomplete, vision of heaven. Sebold’s heaven is also incomplete, in fact so much so, that it felt not so much like heaven but a form of purgatory. Indeed there is no mention of God and his presence is elusive. The heaven Susie inhabits is rather like the parallel universes of Dr Who where you can walk the same streets, live another life but with the addition of being able to watch and sometimes influence the other world. Personally, I’m not sure that when I die I would want that option so I was pleased there was the suggestion that, at some point, Susie could move on to another, perhaps more sympathetic and complete form of heaven. However, when the event that might trigger Susie’s onward journey finally occurs it is only for her to inhabit a friend’s body and make love to a teenage boy she once kissed. Although touchingly written, I was saddened that her reconciliation required her to take on human form again; it felt more of an exercise in sexual maturity rather than in spiritual growth. Disappointingly, Sebold’s heaven seemed to be one where both heaven and earth are inextricably and permanently entwined even after death. Personally, it’s not an image of heaven that appeals; I’d like to believe that heaven is a place of unremitting joy where entry isn’t won, earnt or gained through earthly associations but granted to all out of love and forgiveness.

Conversely, in The Shack, it is Young’s vision of heaven and exploration of his beliefs that bring salvation to a book that struggles at times to portray the heartbreak and grief that Sebold captures so well. However, The Shack does offer a more complex and deeper insight into heaven than The Lovely Bones. Whilst the fundamental principles are Christian in concept, in particular the exposition of the Holy Trinity, The Shack is by no means a simple enforcement of Christian doctrine and there will be many who will take issue with how Young embraces all religions and portrays God as a black African American mama and the Holy Spirit as an ethereal Asian female. There were times when my imagination was stretched, in particular with an episode that was reminiscent of Close Encounters of the Third Kind but, nevertheless, it was impossible to read The Shack and not be infused by Mack’s joy in reconciliation and the love of God.

Of course, we won’t find any real answers to what lies in heaven in any work of fiction but both novels do provide interesting sounding boards for thought and discussion. As novels, neither is perfect and both suffer from weak endings. However, a novel doesn’t have to be perfect to be a worthwhile read and it is impossible to walk away from either book without feeling some degree of satisfaction. The Shack is perhaps more memorable because of the infectious happiness that accompanies Mack’s redemption whereas The Lovely Bones leaves a feeling of melancholy as despite Susie’s apparent moment of reconciliation she continues to walk the earth, watching and waiting.

It would not surprise me if The Shack remains Young’s only mainstream novel. The story is really a testimony to Young’s own personal tragedies and his triumphant return to God and thus his deficiencies as a writer are overshadowed in what is a powerful and influential story. His words will, I’m sure, give hope and encouragement to all those who seek comfort, faith and salvation. As for Sebold, there is no doubt she has a greater gift of expression and a genuine talent for telling tales. Hopefully, The Lovely Bones will be the catharsis for the brutal attack that left her so deeply scarred. If The Lovely Bones acts as a means for Sebold’s own reconciliation then, like The Shack did for Young, it will be a means for her to move on with her life in a positive and joyous way.

As for the rest of us we can only be grateful when we read stories like The Shack and The Lovely Bones that portray in greater detail the horror of child murder that we never have to endure such agony. And for those few unfortunate parents who do, we can only pray that when they climb their own stairways to heaven it will bring them the peace that, no doubt, avoids them in this earthly life.

Email ThisBlogThis!Share to TwitterShare to FacebookShare to Pinterest
Labels: The Lovely Bones by Alice Sebold., The Shack by W.M Paul Young