A Childhood In Fiction

Books played a vital role in my childhood. Forty years ago, before the advent of computers and game stations my days were spent drawing, making mud pies and, most significantly, reading. My world was one of fairytales and fables, myths and legends, witches and wizards. With no Sonic or Mario to distract me the open pages of a book were the places where my imagination took flight. Like Dorothy, I was swept away to a land of make believe.

My first school memory was being the second child drawn to the front of the class to read aloud from a newspaper, the reward for becoming a competent reader. I recall too that Sarah, my best friend, was first and though pleased for her I jealously noted that she was five months older and so must have received an unfair advantage.

Those early days were filled with Ladybird editions and picture books where simple texts were enhanced by pictures of handsome princes, hideous ogres and rosebud princesses. I remember too sitting in my grandmother’s high bed listening to her read more advanced texts like The Little Princess. I was fascinated by the written word and, more often than not, in my mind I became the central character. Indeed some nights, before I understood religion, I prayed that I would be left a sparkling dress like Cinderella. Of course it never happened but nevertheless the disappointment never stopped me from fantasizing.

But it was in 1973, having just turned eight, when something happened that made me not just an imaginative reader but an avid and inspired one. My grandparents took my sister and I on holiday to Portugal and one day, whilst browsing the gift shops, my grandparents stopped to peruse a rotating bookstand on the sidewalk. Exclamations abounded as on the stand they found a copy of their son-in-law’s first novel, Run Down. They were amazed to find it in such an unexpected place and duly bought the book and a postcard to send him on which they wrote “Run Down to Faro.” 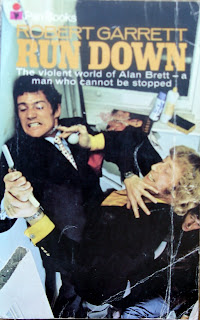 You'd never guess from this cover that my uncle's book
was published in the 1970s would you? (cough, cough)

Of course, for a young girl interested in books, it was exciting enough to discover my uncle was an author but whilst my grandparents enthused something even more important was about to happen. As I too spun the bookstand I found a book that would set me on course for a lifetime of reading. For there, amongst the holiday reads, I discovered The Famous Five.

I can't remember which adventure it was now, although my favourite has always been Five on a Hike Together, but Julian, Dick, Anne, George and Timmy awoke in me a new love of fiction. Their wonderful adventures seemed almost real and tangible; I didn't need golden tresses or magic tinder boxes, all that was required of me were potted shrimp sandwiches and lashings of ginger beer. Perhaps it’s not surprising then that on returning to England, I made fast tracks to our mobile library and within a very short time I'd read the entire collection. 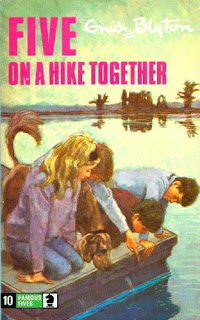 I say, what a super, corking read! Hoorah!

The library was my salvation. My childhood was relatively frugal and books were purchased sparingly but in the library I found an endless supply. Having quickly devoured the likes of Enid Blyton, Ruth M Arthur, C S Lewis, and Tolkien I moved into the adult section. No one ever queried my reading choices and nothing was off-limits. It was a less politically correct world back then and thank goodness for that.

At about nine years old I was moved into the notorious Miss Walsh’s class. Although past her prime, freckled and with slightly hunched shoulders Miss Walsh was still sharp in intelligence and tongue. Miss Jean Brodie was, alas, but a poor imitation. Miss Walsh frequently interspersed her teaching with tales of The Blitz, London’s theatres and other curious events but when it came to education she meant business and her speed reading challenge was one of her favoured tools. It was glorious to win but then there was always the catch - recounting the story in minute detail to the entire class. No doubt Miss Walsh was an oddity but if ever I thought her tales were untrue my thoughts were banished when in the course of time I inherited from her a 1935 copy of Theatre World, autographed by Laurence Olivier.

It was with Miss Walsh’s expert training I sped through the shelves of the mobile library and by my early teens my first port of call was the returns section which I would scan for interesting unread novels before heading to look for my preferred authors. With a taste for adventures with the human touch, I became particularly fond of wartime tales, both fictional and autobiographical. Nevil Shute, Douglas Reeman and Alistair Maclean were firm favourites. But by then, I'd also discovered Ian Fleming and it was with Bond that my destiny as a thrill-seeking, adventure-loving, gun-toting groupie was finally set.

Today, now I'm past my prime too and heading for Sunset Avenue my reading has diversified. In recent years, as a member of a book club, I’ve read novels that previously I would never have even contemplated. It’s been, I guess, a “novel” experience. And now, with or without my Book Club Ladies, I’ll read just about any genre and attempt any book. It’s been rejuvenating. However, without a doubt, my first true fictional love will always be the wonderful world of adventures that began on a bookstand back in 1973.

You know, over the years there’s been as much criticism as there has been praise for Enid Blyton but I, for one, will always be grateful to her for setting me on the path to a lifetime of thrills, spills and spiffing good yarns. 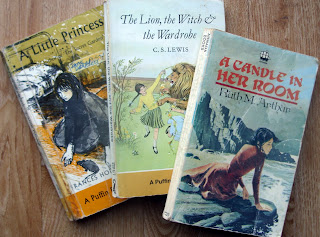 Not as gruesome as my uncle's book but that witch in the Lion, the Witch and the Wardrobe
was pretty beastly I can tell you.

And now I write my own novels too for entertainment. What could be better? Both reader and writer. It's a good life.
at August 09, 2015

There was a buffoon called Johnson Who thought he was Charles Bronson But he fucked-up Brexit So attempted to exit Dressed as a wo...