The View From My Driveway.....

Yes, I'm back from my holiday! Now before I get started on my encounters with the Cypriot sewerage system, precarious roads, ear infections, turbulence and other matters relating to my travels I need to get something out of the way.
This...... 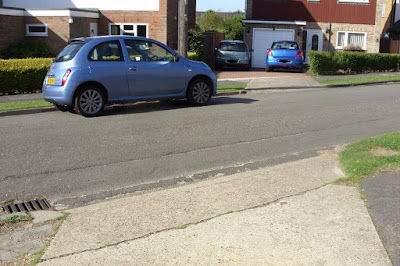 And yes, it did provide good sport. But probably not the kind the owner was envisioning.

Now let's be truthful if you owned a Nissan Micra, or indeed any car, would you park it opposite my driveway?

Personally, I blame Pierce Brosnan. If he didn't keep sending me those piccys of him in his tux and those steamy emails I would never lose my concentration. The problem is as I'm reversing I get this picture in my head of Pierce's butt and then WHAM, BAM there is sudden collision.

Ah well it's been a hell of an 18 months. About everything that could have gone wrong has gone wrong and I've gone from an unblemished driving record to an insurer's nightmare.

But you know I try to keep going. I really do. So after I beat the living daylights out of my neighbours bin, ran up and down the road with fury, ranted, cursed, sobbed and drove up my driveway with such fury I left tyre burns I decided there was only one thing I could do.....

I'm just hoping that this last episode will be last in a long cycle of gloomy incidents that have plagued me for the last 2 years.

Cos you know, even clowns cry.

Yeah, okay that was some real self pitying stuff. I better get my act together - otherwise I'll never get that contract with L'oreal. Right, where's the vino.......