Angels, Flies and a Little Bit of Feeling.

There's been some sad news this week with the premature death of two icons of the modern era, Farrah Fawcett and Michael Jackson.

Charlie's Angels, which was the TV series that made a star out of Farrah, was huge in the UK when I was a teenager, as indeed it was all over the world. I don't suppose there were many girls who didn't imagine themselves as a sexy crime fighting cop or secret agent at some point. Of course, I never grew out of this bad habit which maybe why I spend a lot of time sticking bananas in my friend's ribs and shouting "Freeze or the chocolate bar gets it." (The chocolate bar "gets it" anyway but I just like that "power" feeling.)
Now I'll be honest, I never imagined myself as the stunning Farrah (Yep, even I know when I'm on a losing streak), more of a sultry Jacyln Smith but with the brains of Kate Jackson - but with short hair. Yep, I had short hair back then - and I mean "short" - not quite as short as Demi Moore in GI Jane (ie - bald) but pretty damn short.

Now Farrah and Jaclyn were very sexy ladies but like many girls one couldn't help admire the brainy, quick witted Kate. Although, to be honest, I never seen a woman who looks so unattractive in jodhpurs. Now is it just me who thinks that? In my experience men can't take their eyes of a woman in jodhpurs but somehow they just didn't seem to work on Kate. Hmm... I'm thinking that maybe my aversion to her jodhpurs is why I never had the inclination to learn horse riding. (Oh yes, and the thought of having to muck out the stables.) 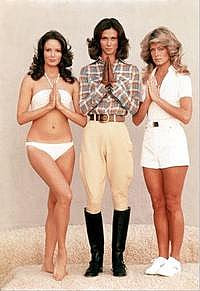 Jaclyn, Kate, Farrah... and those jodhpurs.

But despite all the frivolity and fluffiness of Charlie's Angels, it really was a rather ground breaking. Prior to it, I can't really think of any TV shows where woman were the main crime fighters or who didn't wear specs or a twin set and pearls. I suppose it was really the forerunner to Cagney and Lacey in the US and The Gentle Touch in the UK, where for the first time in television, women were really seen in a grittier, more realistic, crime fighting situations. Of course, these days television has many actresses taking on more challenging investigative roles. Here in the UK, both Helen Mirren and Amanda Burton are hugely popular as a result of their respective roles in Prime Suspect and Silent Witness.

It's a shame that while the original Charlie's Angels broke the mould, so to speak, it was perhaps let down by the 2 movies of the show, starring Drew Barrymore, Cameron Diaz and Lucy Lui. The characters may have been fun and flirty as per the original series but other than that they didn't really reflect the way women have developed in this genre which I'm sure with the right script could have been achieved. In fact, if I'm being honest, I would put the two films in my top 5 worst films of all time. They are a complete load of utter tosh! In fact, I would go so far to say that if I had the choice of shovelling up **** on the pavement or watching Charlie's Angels Full Throttle I'd rather shovel up ****.

Now that is rather opinionated of me I know, but when researching this post I came across this quote from Tom Green (who starred in the first film) which rather justifies my viewpoint. Tom says in his autiobiography that the script for Charlie's Angels was "the biggest piece of shit [he'd] ever read." Apparently, he only signed to do it because Drew Barrymore flirted with him. They later married and (perhaps not surprisingly) divorced.

Hmm... now I can't help imagining that it must have been hell for Tom on a Saturday night when Drew wanted to watch a rerun of Charlie's Angels. Maybe he picked his toenails for pleasure instead? Or took out the trash? Maybe he worked on a sequel entitled Charlie's Angels; Judgement Day. Strangely enough , I also discovered there was also a fire at Tom and Drew's house from which, luckily, they both escaped. However, a nagging thought crossed my mind that maybe Tom wanted to top himself or, at the very least, that the pile of burning DVDs got out of hand.

Either way, he had a lucky break.

Of course, while the films of Charlie's Angels didn't do justice to the original series or the development of females in this genre, Farrah went on to do some very creditable work. I know when I saw her in Extremities in the mid 80s I was surprised at the quality of her acting. Indeed, over the course of her career she was nominated for 6 Golden Globe awards and 3 Emmys although she never took the final accolades. One can't help but wonder whether, in acting terms, she was as much hindered as helped by her iconic tresses and stunning smile.

I guess with such extraordinary looks it's no wonder Farrah lived such an eventful life and I've no doubt that someday her life will be translated into film.

Talking of films I'm sure films buffs like me will be relieved to know (and you may have missed this story due to the news of the demise of Michael Jackson) but fortunately...

Jeff Goldblum is not dead! Hurrah!

Well folks, I've gotta admit I'm a fan of quirky, fast talking Jeff so I was pretty relieved to read that the rumour he'd fallen of a cliff on the set of a film was a hoax. A pretty mean hoax too - one can't help but imagine what Jeff's friends and relatives might have thought on seeing the rumours abound on the internet. I don't know what it is about Jeff even though he so often plays geeky nerds I still kinda like him. (Hmm.. could be something to do with crazy sex scene in The Tall Guy with Emma Thompson though.) However, I do personally hold him responsible for my phobia about flies. Yep, ever since I saw The Fly I've travelled around with a fly swatter in my handbag and my body coated with insect repellent. Not pleasant I know, but thought of a huge blowfly buzzing around my chocolate bars is enough to bring me out in a cold sweat. So while I guess I feel the same way about Jeff and flies as I do about Kate and her Jodhpurs I'm as pleased as punch he's not dead and I'm hoping he'll be gracing our screens for a good while longer.

But of course, the biggest story this week has been the sudden and dramatic death of Michael Jackson. People all over the world have been eulogising about Michael but the truth is no one will ever really know what went on inside his head. So rather than write my own tribute I'm going to play one of his songs. But I'm going to go back to the beginning and to the glory days with The Jackson Five and play Can You Feel It.

Email ThisBlogThis!Share to TwitterShare to FacebookShare to Pinterest
Labels: Can You Feel It, Charlie's Angels, Farrah Fawcett, Jeff Goldblum, Michael Jackson, The Fly