Ireland, The Final Frontier. These are the voyages of The Housewife Extraordinaire. Her two week mission is to explore strange new worlds. To seek out leprechauns and fairies. To boldly find what no woman has found before.....

Yep, that's right. Mrs T has departed to Ireland for her hols because it has come to her attention that she has not been talking enough gibberish. I have been far too sensible lately and that is not acceptable! This must be put to rights. I intend to seek out The Blarney Stone which is a mystical stone said to bestow upon those who kiss it with the "gift of the gab." Apparently, The Blarney Stone is situated at Blarney Castle in Cork but I believe this a vicious rumour circulated by the Knights of Blarney in order to prevent the whereabouts of the real stone from being located... I believe the real Blarney Stone has yet to be found. Like The Holy Grail and Excalibur before it, it remains undiscovered.....waiting for the right man...or woman...to reveal it's lost secrets....

So to Ireland Mrs T must go on her quest.... (Please note 'tis possible Mrs T might get distracted en route with other matters.)

Alas, in order to get to Ireland, one must pass through Wales. This is the land of Postman Pat and Ivor The Engine; more hideous and annoying children's stories cannot be found (Except Thomas the Tank Engine of course.) Postman Pat stories are tales of (surprisingly) a postman who takes days to deliver just one letter whilst getting worryingly distracted by wandering sheep and a black and white pussy. (I'll spare you the intimate details.) It is inherently disturbing that children are being brought up on this stuff! But just to make matters worst... Ivor the Engine is a story about a steam engine; a welsh steam engine. You can't get anything more disturbing than that can you?! It's bad enough being subjected to years and years of Thomas without discovering that he has a cousin called Ivor....

Anyhow, I knew I was approaching Wales when at a toll booth I saw this; 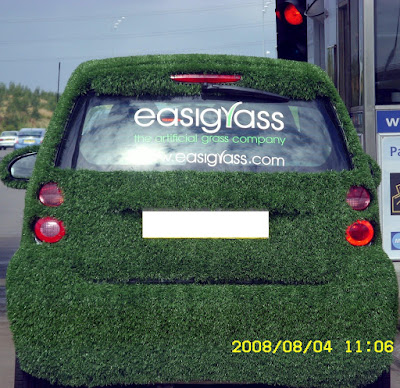 Yes...that IS a car covered with artificial grass. Hmm... only a Welshman could think of that. I just hope the owner doesn't park up outside a dog show. Anyhow, it wasn't long before we hit Wales and a few sheep... it was a tad messy. (Although the resulting chops were excellent.)

The truth is I have strong Welsh connections and indeed went to college in Bangor, North Wales. Bangor is en route to Holyhead, the Welsh port of our destination, from where we were to sail to Dublin. In my student days I travelled to Bangor via the mountains of Snowdonia but this time I took The Turley Tribe by the coastal route; the pleasure of the dramatic mountainous scenery of Snowdonia will await our return journey. 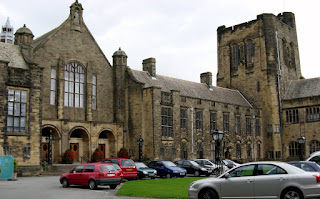 We made a whistle stop tour of Bangor which brought back vivid memories of college days; of friendships that have since endured the test of time, the joy and pain of a first love and most importantly the discovery of Cheese on Chips. (Staple diet for students back then - along with Weetabix spread with jam and Baked Beans on toast. Deeeelicious!) Oh and some academic study. Yes, even lazy old Mrs T fitted in a little study (read very little) - certainly not enough to disturb my sleeping patterns. ( 3am to 3pm)) I often think of the camaraderie of my friends back then... how we shared new experiences, family bereavements, how we clustered around the television when the IRA blew up the Brighton Hotel.... and of course some particularly vile cooking. I am always reminded of those times when I hear the following song by the Irish singer Feargal Sharkey which was popular at the time.


Soon we had to press on through Anglesey and onto to Holyhead..

On board our ferry, The Jonathan Swift, (It was amusingly late) I took this photo of the departing Welsh coastline as we headed for Dublin. 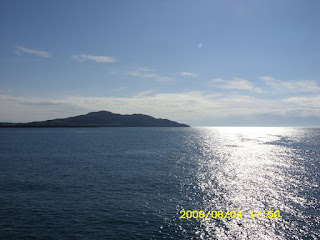 Two hours later we arrived at Dublin in Southern Ireland and it is here on The Emerald Isle that Mrs T's quest for The Blarney Stone truly began.....

to be continued at some juncture...(in a adhoc, bizarre and intoxicated manner as befitting a holiday disposition)