Me and My (Potentially) Award Winning Cupcakes!

I'm sure most of you are aware that I am an excellent chef...there isn't any type of pizza I haven't unwrapped cooked. Or, indeed, any type of cake I haven't  eaten baked. Other women produce cakes with hints of lemon, cinnamon and coco but I like to challenge the status quo of cooking with my daring recipes. It's not unknown, for example, for my cakes to contain hints of Mr Muscle, charcoal and sometimes even tinfoil.

So, a few days ago, I was suitably thrilled when an email from a women's magazine arrived in my inbox inviting me to enter a cupcake competition. My heart began to beat fast with the anticipation of winning a set of silicon spatulas or maybe even a new pinafore. Immediately, I clicked through and studied the pictures of a variety of cupcakes already submitted by my potential rivals. Naturally enough, there were some amazing entries...but I was not deterred. I, Mrs T, mistress of the kitchen, conqueror of the wedged-in frozen food tray, vanquisher of greasy saucepans and subjugator of chocolate bars would attempt the impossible - to produce a unique cupcake that would reduce my rivals to quivering jelly. The key to winning, I concluded, was originality. Thus, I put on my thinking hat and came up with several unusual designs and now you, Dear Readers, have the opportunity to pick the recipe I will submit... 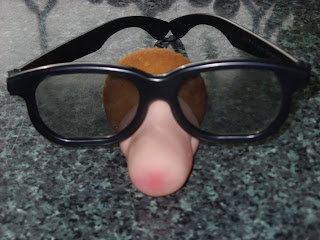 Inspired by the actor Karl Malden. If you're under 40 and don't recognise the name think The Streets of San Francisco - he was the guy with the big hooter who played opposite Michael Douglas. Hollywood has been the inspiration for many a fashion..so why not the cupcake? I think this cake will have aphrodisiac qualities as it well known that men with big noses are particularly attractive to women. And I should know... as Mr T has a particularly large conk. In fact one day when we were on safari in Africa a women pointed at Mr T and said "I want a ride on that elephant!"  To which I replied, "Excuse me that's my husband, please would be so kind as not to point at his conk."

Okay, I lied - we weren't on safari - it was Bognor Regis High Street. Anyway, I see this cupcake as being a real hit with the ladies. What d'you reckon? 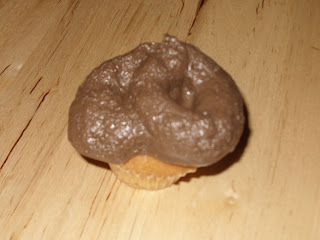 Oh cripes...sorry...how did that get there? Oh yes...I was cleaning the cat litter tray...and well accidents happen...

Um, I'll call this the Chocolate Surprise Cupcake then - with the surprise being that it's not chocolate. Obviously. 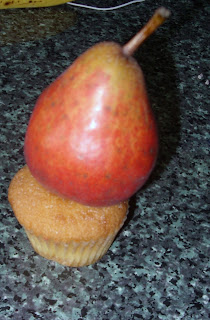 More inspiration from Hollywood. Speaks for itself really. A fruity little number with a lot up top. Counts as part of  your daily portions of fruit and veg. Should be popular with vegetarians, environmentalists and anyone who likes a nice pear. Notice how strategically placed the pear is so you can see the delicious shop-bought sponge cake underneath. 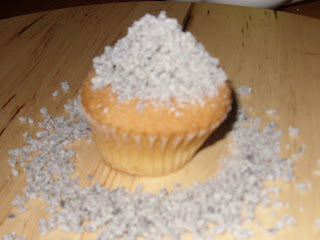 A variation on the traditional chocolate sprinkle theme. As you can see, I was very generous with the chocolate sprinkles - mainly due to the fact I opened the wrong side of the container. However, the overall result is pretty pleasing...

Oh no!  Those aren't chocolate sprinkles; they're beef gravy granules. Cripes, no wonder I thought it tasted a little meaty. 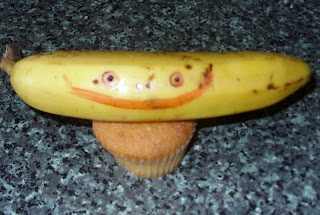 A particular favourite with monkeys, gorillas and readers of The Daily Mirror.

(Oh and if you haven't heard of Piers Morgan in the US - don't worry you soon will. Bad luck.) 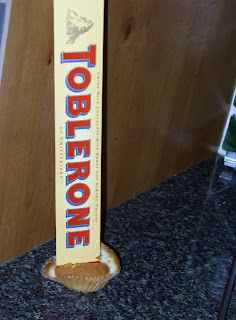 Probably the best cupcake you'll ever have. Comes beautifully presented in high quality packaging and a tower of chocolate.﻿ What more could one want? A sure-fire winner with any man, woman or child. 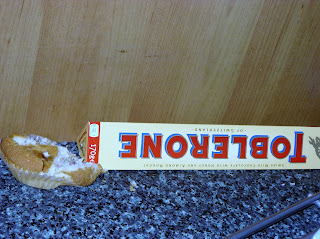 This is the The Fallen Tower of Toblerone Cupcake. You can see where the foundations were wholly inadequate and the icing substandard.

So which one should I submit? Let me know.

Oh, and if you fancy some real quality cupcakes for a special occasion check out this company run by my fellow writer, Jen, at The View From Here. Now that's what I call tasty!

To read my highly academic article (cough, cough) on the delights of the kitchen read my post To Cook or Not to Cook
at September 23, 2010