It's time for another of my Christmas Musical countdowns which, you may have guessed, is Bjork. So here she is singing Crystallline on the Jools Holland show back in November. I was fascinated by her performance - and the song has quite an addictive equality to it as well.

A pretty good song there me thinks. Strangely addictive. Bjork is defintely an original artist. But I have to ask - what the hell was going on with the 1980s' disco culottes and the platform boots? And that hair? She looks like she had an accident with some candy floss and a bucket of sick.

And what is this current craze with false eyelashes about? Apparently sales of false eyelashes have rocketed recently. To be honest, I think when you're eyes are so loaded up with mascara and lashes like Bjork it just looks like you've got two dead blowflies on your face or you've done a couple of rounds with Mike Tyson. I tried putting some on the other day and when I stepped back from the mirror I thought I looked like a zombified Zsa Zsa Gabor.

There for the grace of God, go I.

Anyway, talking of Bjork. I read this book earlier in the year. In fact, it might even have been last year. 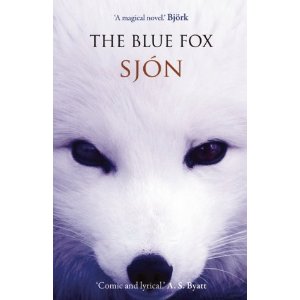 The Blue Fox is written by a chap called Sjon, who also happens to write lyrics for Bjork. The novel is short and sweet and, like Bjork, strangely compelling. It's a fairytale about a fox and rather good it is too. Well that's probably putting it too simply but it is well worth the read. I got my copy from the local library as at the cost of 7.99 (at the time I considered purchasing it) I felt slightly annoyed as it is a mere 112 pages. I do wish these publishers would stop trying to screw us - especially with ebooks. I am, quite simply, not going to pay the same price for an ebook as for a paperback and no argument is going to convince me that I should!

Right, I'm going to go and get my boot polish out and scare the neighbours. I might even dust the windowsills  first and see if I can find some blowflies.
at December 30, 2011