I'm in love with Arnold Schwarzenegger! Damn it, his butt is goood!

I'm so excited because a few days ago my preordered copy of Terminator 4 arrived and this weekend I'll be settling down to watch it. Hurrah! Yes, one of my guilty secrets is a love of sci fi movies so even though it's a major disappointment Arnold Schwarzenegger isn't in the movie I'm still gonna check out this latest release in the Terminator series.

I wonder if Arnie has any guilty secrets? Hmm... maybe. In fact you might have seen the letter below circulating in the press which apparently Arnie sent to San Fransisco politician Tom Ammiano. Now Ammiano had been a little rude to the lovely Arnie and apparently walked out during a speech Arnie was making saying "Kiss my gay arse. " Now that's not very polite is it? In fact it's very, very naughty! Anyway Arnie sent Mr Ammiano a letter which not only rejected Mr Ammiano's legislature but carried another subtle little message; 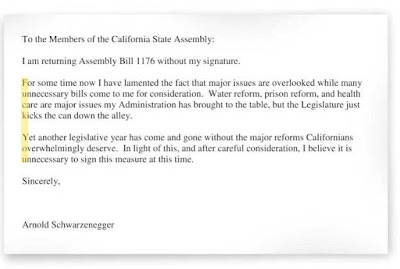 Yes those highlighted words do read something a little saucy! Was it intentional? Only Arnie knows for sure. But personally, I believe it was deliberate. So what can I say but......

Gez, Arnie's got style! Boy, I love that guy! Not only has he got a well hot body, stars in fab sci fi movies but he's probably got a decent sense of humour! That's a winning combination for Mrs T! What I want to know is... what the hell is he doing with that Kennedy woman? What's she got that Mrs T hasn't got? Apart from the nice figure, pretty face and the massive bank account? Those things just aren't important! What Arnie really needs is a nice hot young Brit Chick like Mrs T. Yep, I've been practising that strip routine in True Lies for at least a decade and I feel sure I could win him over. Indeed, I regularly tip my daffodils over my head, rip the trim of my pinny, strip down to my bloomers and practice pole dancing with my broom. I mean, what man could resist Mrs T showcasing her bloomers?!

Right, better get back to watching Terminator 2. It's been on "pause" a bit too long. No reason.

Arnie's got a nice butt hasn't he?

Ps: Happy Thanksgiving to all my American friends. I just love that accent and all those crazy sci fi movies. Keep up the good work!

(I'm excluding War of the Worlds with Tom Cruise by the way. No way can a pint size guy save the world all by himself. Fact.)

Email ThisBlogThis!Share to TwitterShare to FacebookShare to Pinterest
Labels: Arnold Swarzenegger, Pour a bucket of water over me, rude letter, Schwazenegger's butt is hot